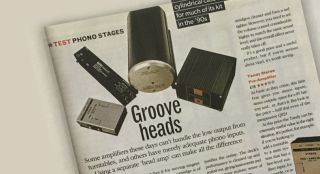 Outboard phono stages haven’t always been a thing. Up until the late ’80s they were the preserve of obsessive high-end brands and those seeking the last percentage point of performance. Then CD took off, and vinyl sales fell off a cliff.

Amplifier manufacturers saw the potential for saving costs and decided to ditch the built-in phono sections in their products.

Those who still wanted to play their records had to find an alternative – and that led to the rise of the affordable stand-alone phono stage.

See all our phono amp reviews

The company made more distinctive-looking products back then. The X-LP was built into a lovely cylindrical casing, a design used across the range (which also included preamplifiers, monobloc power amps and headphone amplifiers).

Take a look at the specification sheet and there’s not much to differentiate the X-LP from its descendant – both can cope with moving-magnet and moving-coil cartridges, though the newer product allows for adjustment of cartridge loading (albeit in a rather clunky way).

Start listening to your music and the two have far more in common than the difference in appearance and the time gap might suggest. Both have a refined, spacious sound that’s packed with detail.

The LX2-LPS is cleaner sounding and more precise, perhaps, but the old-timer doesn’t lose out when it comes to the fluidity of dynamics or the ability to enthral the listener.

If you find a second-hand X-LP for a good price, don’t hesitate to take the plunge. You won’t regret it.