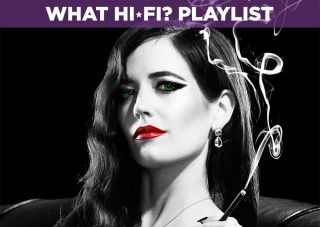 “Sin City’s where you go in with your eyes open, or you don’t come out at all.”

Bullets, booze and broads: that’s what you’ll find in Sin City, where it’s always midnight and everyone has a hand in something dirty.

It’s been nearly ten years, but things around here don’t change. If you liked it the first time, welcome back. You’ll feel right at home. If you didn’t? Well, better get out before you’re swallowed up and spat out like a bad aftertaste.

For the uninitiated, Sin City is a series of graphic novels, now twice adapted into motion pictures with pounding basslines, moaning saxophones and husky voiceovers.

This is a nasty world of crooks and dames, presented with Frank Miller’s signature hyper-stylised, ultraviolent panache.

It’s an over-the-top noir homage and a sight like no other. Nearly everything is starkly black and white, occasionally broken by splashes of bright colour. The novelty factor isn’t as strong as it was in 2005, but it still looks beautiful.

Witch green eyes. Ruby red lips. Blood, curiously, is white. It’s probably a good thing considering how much of it is spilled. There is a lot of violence here. Throats are slit, heads are crushed and there’s a particularly nasty bit involving somebody’s fingers.

But it’s not just the violence that's gratuitous. There’s also a ridiculous amount of nudity. Eva Green almost never puts clothes on, and the girls of ‘Old Town’ offer a parade of flesh and fishnets. And yet, it never truly feels offensive. Despite the relentlessly grim tone, Sin City is never entirely serious.

There’s more than a degree of camp to everything. The narration is little more than a string of clichés from the dustiest of detective novels.

Much of the cast is superb but clearly having a great time hamming it up with mindless drivel.

As with the original, Sin City 2 serves up a handful of slightly intersecting storylines. The opening segment has a thug terrorising a bunch of obnoxious students. Elsewhere, a cocky gambler messes with the wrong people. A femme fatale torments her ex-lover. A stripper tries to take down a politician.

Most of these tales are compelling and hugely entertaining. Well, not the bits with Jessica Alba. She still can’t act and has frankly no presence. But that’s fine, because Mickey Rourke is great fun and Eva Green is utterly captivating.

What’s confusing (read: a narrative mess) is that the film serves as both sequel and prequel to the original. One of the stories happens before the first film. One takes place afterwards. And then there are a couple of re-cast characters, which feels odd.

Sin City 2: A Dame to Kill For is much like its predecessor. Either it’s a guilty pleasure or it’s entirely abhorrent, and only you can decide. If nothing else, it’s a sensory delight. The Blu-ray can’t come quickly enough.

A note on 3D: this one is actually quite decent. Those splashes of colour do get a little muted, but if you want more depth to people being thrown through windows, go for it.