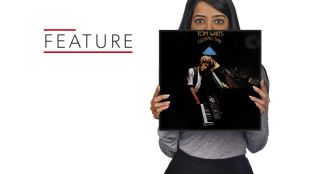 We spend 365 days a year admiring the merits of vinyl as a source of music, but milestones - such as the 70th anniversary of the 12in vinyl LP - and the annual Record Store Day make us even more rhapsodic than usual. Naturally, this makes us reminisce about the first record we ever spent our own cash on. So join members of the What Hi-Fi? team as they blow any remnants of credibility they might once have had and reveal their first steps on the ladder of lifetime-long vinyl addiction.

"Liar!" shouts the print editor. "You couldn't be that cool" adds the online editor. I'm almost speechless with impotent rage. "It was. White Man in Hammersmith Palais was the first vinyl record I bought". And it was.

I remember it all. Getting the 37 bus into Richmond with my Mum. Lunch at Café Mozart (I had the apple strudel with an Earl Grey chaser). The tan cords I was forced to wear. And the climax: a visit to WHSmith to buy my very first 45rpm single.

Everyone has to move on in life, of course, and I have - thanks to a strong support network of friends and family. And thanks to Joe Strummer, Paul Simonon, Topper Headon and Mick Jones, who made me cool if only for a fleeting moment. But no thanks to my 'colleagues' who have doubted the truth more-or-less until this very moment.

The first time I bought a record I almost certainly bought two.

Having saved a not inconsiderable amount of cash, I had bought two pairs of cheap belt-drive turntables from Tottenham Court Road. The life of an international superstar DJ was now surely a mere formality.

As a teenager into dance music in the mid-90s (who lived just about close enough to the M25), that meant drum'n'bass and UK garage. I distinctly remember realising I wouldn't be able to afford to buy all the records released each week for both genres (for I would surely need them all), and choosing - after much deliberation - to focus on garage.

Rex Records (now closed) is where I went first, even though it was more of a rock/pop specialist - the dance music shop seemed far too intimidating from a quick walk past the window. I did ultimately progress to the not-actually-intimidating Red Eye Records (now online only), Andy's Records (now closed) and the well-kept local HMV (recently reopened). I knew one of these records, while the other was almost certainly chosen because a) it sounded cool and b) was in the right section of the shop.

The DJ career never really progressed beyond my bedroom but I haven't stopped buying and mixing records - and 90% of my listening remains various forms of dance music. And I still have both these records - plus the Technics 1210s I should have saved up for in the first place.

Queen - A Night at the Opera

There are advantages to having an older sibling. Not many, but some...

In my case, having a sister two years older meant I watched Top of the Pops a year or two earlier than I might have done. For the most part - being a rather gauche little boy - this meant I was more than happy humming along to such belters as Ray Stevens' The Streak. But I wasn't averse to some more credible early-70s fare such as Roxy Music or T. Rex.

Inevitably, it was an episode of TOTP that drew my attention to Queen. Freddie Mercury in an incongruous fur jacket belting out Killer Queen was fascinating to this nine-year-old - and it was a song quite unlike most of the tunes I generally found myself listening to. I was sold on the group and its music.

Almost exactly a year after that fateful Thursday evening in November 1974, Queen released A Night at the Opera. It was the first record I ever really considered buying - my sister had plenty of vinyl by then, and I was generally perfectly happy with her choices. But I wanted - needed - A Night at the Opera to be mine. So down to Our Price I went to hand over my precious pocket money, and a new way of life was begun.

I would normally say "...and I've never looked back" at this point - but I find myself looking back more and more lately. Still, there are worse places to look back to than your 10-year-old self hearing this record for the first time.

I didn't buy my first vinyl record until I started working at What Hi-Fi?. Growing up in the era of CDs and cassettes, there wasn't much vinyl in the house apart from Dad's old records (including Garth Brooks and Eurovision 1991 winner Carola. Yeah).

So when it became imperative to have at least oe piece of vinyl of my own that I knew inside out (for testing hi-fi kit at work), there could be only one...

I love Tom Waits. I love his voice - that gravelly, raspy, whiskey-soaked croon full of cynicism and unexpected tenderness. His storytelling is sublime in its down-to-Earth-ness, wrapping you up in smokey-blue nostalgia for memories you've never had and lives you've never lived.

I first discovered Closing Time at university and fell madly in love with every song. I Hope that I Don't Fall in Love with You is bittersweet, and if those piano notes on Martha don't bring a tear, you're dead inside. I still can't believe it was Waits' debut album. He was 24.

No matter how many times I hear it, this album still unearths so many emotions. It's a poignant, heartfelt, deeply affecting record, one you can just sink into.

I've since lost that record, about two years ago during an office move. And while I know I can find another copy easily online, part of me doesn't want it replaced so easily. Instead, I'm resigned to sifting through Soho record stores every month or so, hoping it'll come back to me. I blame Tom Waits for this sentimentality.

"Naughty boys in nasty schools" are the first words of the first song on side one of Absolutely. This may be part of the appeal Madness had for me when I was 10 or 11 years old - I was unarguably a good boy, and I went to a nice school. Or maybe the appeal was in the daft videos. Or the über-simplistic melodies they traded in, each as catchy as influenza. Or their ska/2 Tone affiliations, which were all the rage in the Birmingham of my pre-pubescence.

Whatever the reason, I loved Madness. And so it was to WHSmith on Erdington High Street I went, with the combined spoils of Christmas and my too-close-to-Christmas birthday monies.

I played that record to death on my god-awful all-in-one record player - and its death can only have been hastened by the plough-effect of the stylus and tracking weight. But, like more-or-less anything one experiences for the first time, Absolutely means more to me than simply what it is - which is an excellent sleeve and some so-so songs.

Taking Back Sunday - Where You Want to Be

The first vinyl record I bought was a birthday present for my sister about four years ago - it's only three days away from my own birthday, so it was also (secretly) for me. I hold the band quite close to my heart, as we've both been listening to Taking Back Sunday since we were kids - and we continue to do so.

My sister was the one with the record player in her room in the flat we rented together, and so if I ever wanted to listen to it (or other LPs) I'd go and sit in her room. I enjoy the sound of vinyl - it's definitely different from other formats. By the time I discovered it, though, I was an adult - growing up in the late 90s, most people had abandoned it and moved on to MP3. Not me, though.

As some guilty of the same offence may not care to admit, I bought my first piece of vinyl before I owned a turntable - partly, I think, to force myself into buying one. (It worked, by the way.) Indeed, the beguiling picture disc through the clear sleeve (released for Record Store Day 2015) got the better of any logic and became the first vinyl record I could call my very own.

With its title loosely alluding to its genre theme and compilation format, the album comprises freshly re-arranged and re-recorded tracks composed by Goblin (the apotheosis of Italian prog rock) for cult-classic ‘70s horror films by, mostly, the Godfather of Italian horror: Dario Argento. He and the band had a director/composer relationship comparable with that of, say, Tim Burton and Danny Elfman.

The acclaimed title tracks from Argento’s Suspiria (which is currently being remade, with a Thom Yorke score), Profondo Rosso and Tenebrae feature, as does the theme from George Romero’s 1978 Dawn of the Dead. In musical terms, that’s an hour of pummelling percussion, ghoulish whispered vocals, and discordant synth-laden melodies laid down by Simonetti’s trademark keyboard. Not one for a Sunday afternoon chill with tea and biscuits.

The sleeve is battered, and the disc is damaged, and there are pops and clips throughout in a way only vinyl can sound. But Rumours was born from bad relationships and aggression and affairs.

To me, it’s somewhat poetic that my first physical experience with this iconic album can be so uniquely damaged that it only serves to highlight the damage of the band – and, by extension, the damage everyone has felt dealing with their own tough times.

You can give me a new, shiny, repressed record of this album tomorrow; I’ll still hand it back. I’d prefer to listen to my little, damaged disc in this little, damaged world.

The Kinks - All Day and All of the Night

And so it was that, at the tender age of 6 and thanks to a maternal bribe to behave myself at the dentists, I found myself on tiptoe peering over the counter of Landau's of Sutton with six shillings and eight pennies in my sweaty little hand. About to buy my first vinyl record!

Mum was very keen for me to choose Walk Tall by becardiganed crooner Val Doonican, but my mind was already made up. I wanted All Day and All of the Night by Muswell Hill's finest: The Kinks.

There was always music in the family home and, to be fair, Mum was quite a fan of The Beatles and The Rolling Stones - initially, at least. "Before they went all hairy", as she once informed me.

But as I dropped the stylus on to my very own record for the very first time, and Dave Davies' iconic riff blasted out, Dad appeared in the doorway. "What's that bloomin' racket?"

"It's not a racket. It's The Kinks!" I replied. "Well, they sound pretty kinky to me", said Dad, retreating. Parental disapproval! At six years old! I knew there and then I had chosen wisely.