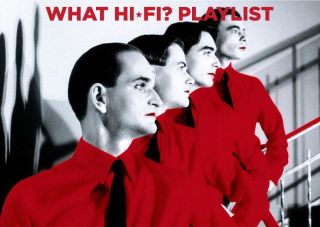 It was almost a decade ago Kraftwerk began using 3D projections during encores. If you manage to see them on their forthcoming tour – and we doff our collective cap if you were on the ball enough to get tickets – you'll find they've gone 'all in' on 3D.

Equally challenging to procure were tickets to the German electronic pioneers’ 2012 and 2016 shows, during which they played choice cuts from their eight studio albums at contemporary art galleries and museums. And it's footage of these tours which has been compiled to present 3-D: The Catalogue.

Ahead of the Blu-ray release on 26 May, we were only too pleased to accept Dolby’s offer of a screening of this rather unique concert film at their London HQ, which, unsurprisingly, houses what must be one of the best Atmos cinemas in the world.

We shan’t use this space to gush about Kraftwerk or their impact on electronic music – if you’re reading this we’ll assume you already know that – but a point is to be made here about the sound, in that there has evidently been a lot of work done to the production.

There is no crowd noise – but for the odd wide-angle shot where you see a few floating camera phones, it almost looks like a private performance – so it fails to capture that atmosphere, the bedrock of a number of concert films, by design. But what it does allow, with the performance cleaned up in such a way, is a cohesive and unobtrusive integration of Dolby Atmos to otherwise squeaky clean renditions of the hits.

As for the film itself, much of the focus is on the projections behind the quartet, with music-video-esque full screen segments interspersed with the odd live shot for context, with tracks such as The Robots, where the band are replaced on stage by their somewhat sinister robot likenesses, given more stage time than others.

In terms of the 3D, it’s probably actually those moments that’re most impressive; the perspective they give of the group against their backdrop works as an immersive substitute to the sonic atmosphere they’ve chosen to omit by eliminating any crowd noise.

Of the projections themselves, there are effectively two kinds: those that are entirely computer generated for the purpose, and those, such as Tour De France, where archive footage is treated.

The former has predictably allowed for most experimentation; for Autobahn we are alternately outside and inside a variety of German cars, with our steering wheel and rear-view mirror in front of us when in the driving seat, while the latter largely uses the 3D aspect for perspective, graciously avoiding a wilful abuse of the technology.

In short, there’s nothing we can say against the film: everything it sets out to do, it does, creating in the process a concert film as progressive as its subject music deserves.

But there’s a lot to be said for the venue: the size and quality of the screen, but also sonically with its rib-rattling bass and built-to-spec Atmos.

We aren’t suggesting you need a cinema room as extensively kitted out as Dolby’s own to enjoy 3-D: The Catalogue, and we’d recommend it regardless to debutants and hardcore fans alike, but it might be the Blu-ray that tempts you to invest in a 3D-compatible projector and worthy surround sound system.

It was also suggested that a wider cinema release may be in the pipeline, so if a TV and a soundbar is all you have, then keep your eyes peeled: it’ll definitely be worth the price of a ticket.

View Kraftwerk 3-D: The Catalogue on Blu-ray audio at Amazon