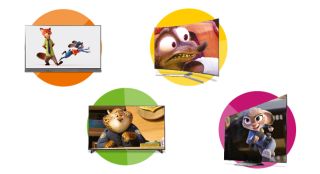 The halls of the Las Vegas Convention Centre in early January were the venue for some of the biggest technology announcements you’re likely to see throughout 2016. For the ‘Big Four’ television manufacturers – LG, Panasonic, Samsung and Sony – that meant unveiling their new TV ranges.

This year, however, there was a more focused approach than we’ve seen previously, with the manufacturers appearing to concentrate on the one stand-out set of the range. So here are those big TV announcements from the Big Four that we're most excited about getting in our testing rooms in 2016.

LG currently seems to be the only TV manufacturer of the Big Four that’s fully placing its bets on OLED. The cry of “it’s too expensive” falls on deaf ears with LG – it has eight OLEDs in its 2016 range. At the top is the G6, which forms part of LG’s new Signature collection, a high-end line-up of products across categories including white goods.

The G6 ticks off all 2016’s must-haves. It’s a 4K OLED panel with 10-bit HDR processing for greater contrast. LG says it is capable of more than a billion colours and can reach 600 nits peak brightness and less than 0.0005 nits black level.

This qualifies it for the UHD Alliance’s new Ultra HD Premium standard, and it will also be compatible with Dolby Vision technology. On an aesthetic level, the G6 is the thinnest TV LG has produced and is nothing short of stunning. The OLED panel measures just 2.7mm deep, with a panel of glass fixed to its back for reinforcement. It has a unibody approach, with no screws or bolts to blemish the sleek, minimalist lines.

Many will be happy to hear it’s a flat screen too. LG has heeded the cry of the customers who don’t want curved screens, particularly in the high-end market where TVs are often wall-mounted. The G6’s stand is a clever construction which houses not only all the TV’s connections, but also a 60W 4.2-channel speaker base developed by Harman Kardon to fire sound forwards. It folds under the TV for wall mounting, with sound coming out of a secondary grille instead.

Smart TV functionality on the G6 is handled by LG’s webOS 3.0 platform, which now includes support for Freeview Play – a service that combines catch-up TV from the BBC, ITV, Channel 4 and Channel 5 with on-demand services and live TV.

The G6 will be available as a 65in screen size sometime towards the end of March, followed by a 77in later in the year.

Panasonic had a fairly small AV showing at CES 2016, with the announcement of its new flagship DX900 LCD range alongside the long-awaited UB900 UHD Blu-ray player, but no new OLED sets.

It promises better-than-ever picture performance, with Panasonic’s innovative new ‘honeycomb’ structure, controlling hundreds of isolated backlighting and local dimming zones. This technology is claimed to deliver brightness of 1000 nits across much more of the screen than its competitors, all without compromising inky deep blacks.

Panasonic hasn’t put as much emphasis on the slimness of its TV. The DX900 isn’t chunky, but it’s not as wafer-thin as Sony or Samsung’s offerings. The bezel is still reassuringly slim though, and Panasonic has opted for a stand that sits mostly behind the TV. It might not be as eye-catching as its rivals, but there’s no doubt it’s still a smart-looking TV.

Firefox OS once again serves as Panasonic’s smart TV system, a welcome return for one of the more streamlined and well- designed interfaces of 2015. After the DX900’s release, an update will include new content providers, HDR support for Netflix and Amazon, and a way to link Firefox across platforms, including a ‘send to TV’ feature for sharing content.

As for sound, the DX900 packs a speaker array that includes four passive radiators for delivering a weightier sound, alongside powerful Neodymium magnets in the speakers that help to produce clearer, more expansive output.

The Panasonic DX900 will be available in 65in and 58in screen sizes, and is expected in the spring.

Samsung hasn’t been shy in its support for curved screens in recent years, so it’s no surprise to see its KS9500 2016 flagship screen (to be known as KS9000 in Europe) features a gently curved design.

We’re still not convinced of the viewing benefits, but there’s no doubt that it looks nice, helped by the fact that Samsung has managed to all-but do away with the bezel on the KS9500.

We’re not quite at bezel-less bragging rights yet (though Samsung is trying), but it’s certainly an impressively small bezel for such a big screen. It creates a minimalist, fuss-free finish, which is supported by Samsung’s “360-degree design” with no visible screws, inputs or ports on the front or back.

The KS9500 is the first Samsung TV to be officially labelled as Quantum Dot colour technology. Samsung says there have been some improvements to the technology, although its 2015 Nano Crystal tech was basically that with a different name.

The KS9500’s panel is a 4K, 10-bit display with support for 10-bit HDR processing, conforming to UHD Alliance standards. It’s an edge-lit set, which seems strange for a flagship, but with a peak brightness of 1000 nits it challenges what we’d expect from a direct-lit picture. This is supported by Samsung’s Ultra Black technology, which aims to reduce glare and reflections.

Samsung has introduced an improved Smart Hub, which aims to deliver a much more streamlined and simpler approach. There’s also Smart Control, which recognises hardware connected to the TV over HDMI and allows you to control it using your Samsung Smart Remote, plus they all feature Internet of Things hub technology for controlling more than 200 SmartThings, from light bulbs to doorbells.

Unusually, over at the Sony stand, the spotlight wasn’t on the flagship set, but on the model below it, the XD93. Available in a choice of 55in or 65in, it cuts a different shape to last year’s sets, replacing the chunkier wedge design with Sony’s new ‘Slice of Living’ concept. In fact, this runs across all of Sony’s 2016 TVs, which are much slimmer and more streamlined in comparison.

The magnetic fluid speakers that used to feature along the edges of some premium models have been ditched. Instead, the XD93 features more traditional, downward-firing speakers built into its chassis. We can’t help but feel a little disappointed – we thought they gave Sony a real edge in the sound stakes.

Design aside, the big news for the XD93 range is that it’s the first to use Sony’s brand new Slim Backlight Drive technology. This uses an edge-lit backlight structure, which Sony claims allows the set to compete with full-array models when it comes to handling brightness and contrast.

Like all Sony’s 2016 Ultra HD TVs, the XD93 is HDR compatible, which is indicated by Sony’s new ‘4K HDR’ logo. Interestingly, Sony chose to go with this rather than the UHD Alliance’s Ultra HD Premium logo, which all three of its rivals carry. That’s not to say Sony’s TVs don’t reach this spec, but Sony’s justification is that it wanted its own logo to use across future ranges of 4K HDR products, beyond TVs.

Elsewhere, Sony’s new 4K sets once again use Android TV as their operating system, which means Google Cast is included for beaming content to the set from a smartphone or tablet, plus there’s new Netflix integration that offers up content suggestion directly within the UI.

We’re expecting the XD93 to launch in March, along with the XD94 flagship and the rest of the 2016 line up.