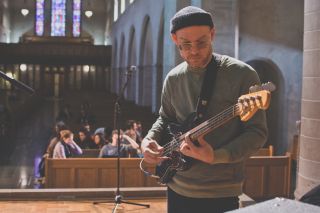 How long does it take to write, record and mix a sonically awesome record? Well, according to The National’s Scott Devendorf, about a week should be sufficient.

That’s how long it took to create LNZNDRF’s self-titled debut, anyway, a project Devendorf began with his brother Bryan, with whom he makes up The National’s rhythm section, and Beirut’s Ben Lanz simply as a vessel to improvise some Krautrock-inspired jams. What those sessions spawned was a darkly atmospheric work with textures so thick your system would need a drilling rig to dig out all the detail.

It’s somewhat a departure from Devendorf’s work with melancholic masters of American alternative music The National, and here he talks us through how the band arrived at their sound as well as discussing his home rig and what he looks for in a great album.

What Hi-Fi?: Let’s talk about the LNZNDRF album. It’s an interesting project, we read you recorded it in an old church over just a couple of days.

Scott Devendorf: That’s true. We did all of the basic tracking, which was all improv basically, in two and a half days; half a day of setting up and testing and then two days of just recording straight through everything that we came up with on the spot. There were one or two items we had ahead of time, chord progressions or whatever, but really it was just us playing together. The whole premise of the band started as a completely improvisational, freeform thing, kind of off the cuff, so we kept that idea recording to just see what happens.

So we recorded everything in two days, then over the course of several months between recording and mixing we listened to everything, going through and finding the parts we liked best and tried to structure the songs out of these really long jams, which were 20 minutes or 30 minutes sometimes. That was our process. Also we wrote most of the lyrics kind of on the spot in the mixing process, and we did some singing and a little more playing of some horns and some keyboards. It was kind of a little ongoing improvisational process, the whole thing until the end. So I think the whole thing took us probably about a week.

WHF?: Did you choose the location for its acoustics?

SD: It was two things: it was partly convenience, it was a central location with us all being in different cities at the time, but also Bryan had found this church called the Monastery, a former church that’s become a recording studio. It’s a professional recording studio and they have great gear and great equipment, but the room itself had an open, very reverby sound. Also the way we record the instruments, drums especially, with a couple of room mics and nothing really close gives it this very washy, reverby sound, and then we mix with a lot of side-chain effects to give it more delays and spatial aspects. I think even the basic tracks have this warm, open sound; it was recorded digitally but I think it has a kind of older sound, in a way, because of the way things were mic’d and recorded.

WHF?: There’re a lot of synths and electronic instruments as well, though; how do you get those to sit well with the live instruments?

SD: We were putting the synths through a lot of analogue delay and then micing them through amps, so it gave these things a wash and warmth that bled into the other live instruments. Then when we were side-chaining when we were mixing it brought everything into the same space, so there’s nothing that’s too digital or too analogue, it’s just this mushy sound.

WHF?: How involved are you generally in the production process with LNZNDRF and The National?

SD: In both projects we’re pretty hands on; everyone’s super opinionated and everyone has a strong sense of sound. It isn’t that anybody’s super technically skilled, we’ve learned things over the years obviously, but everyone’s concerned with the presentation of sound. It’s a really active process. No one’s really concerned with what’s happening while it’s happening; it’s a case of building up a collage.

WHF?: What kind of kit do you use when you’re mixing a record?

SD: We listen on several different things, basically as low end as you can get, too, like iPhone headphones or in different cars. We’ve always done that with The National, too; a few years ago when we were making records with Peter Katis we’d always go out to his Honda Civic and that was kind of like the litmus test. You want to hear it on the great big studio speakers, high-end audio, but you want to make sure it works for basic level speakers as well.

WHF?: What do you use to listen to music at home?

SD: If we’re listening to digital music usually it’s Sonos, which is easy for checking out a new record or just playing our music off of a laptop, and in the basement there’s a Music Hall amplifier and CD player and Pro-Ject turntable with some Totem bookshelf speakers. So usually I’ll listen to stuff on that system, like when we were listening to the LNZNDRF test pressings it was good for that because it’s pretty flat. We found in the first test pressings it took away some of the growl and grumble and analogue murk we liked about it, so we went back to mastering and put it back.

WHF?: What is it you listen for in an album?

SD: I think it’s just emotion and how you capture that. The last two or three years I’ve been really into this record that’s all just piano pieces, by Jordan De La Sierra, and I think it was recorded in 78, and it’s just these 25-minute pieces that’re really meditative. I think it’s recorded maybe in a church but definitely this kind of reverberant space. And I’ve been really into Nils Frahm with his solo piano records, and he has some electronics and keys as well, but that sort of stuff you put it on and it just has this space that draws you in without focusing on songs.

Like, especially with The National, we’re so focused on songs and, as abstract as they might be sometimes, there’s definitely a focus on the voice and instrumentation that supports the voice, so for me it’s refreshing to listen to some instrumental, ambient music that just draws you in and there’s a mood it puts you in sonically. Something about that stuff just lets you spend time in a space sonically and it envelops you in a way, and that quality in any music for me is really important.