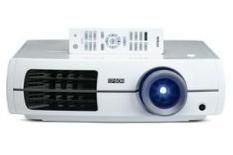 Good but not great, Epson may be top dog in terms of world sales but they can be beaten on performance

Did you know that Epson is the top-selling projector brand in the world?

No? Well, consider yourself told. It's not a brand that normally finds its way to the top of our performance-per-pound pile, but could the £999 EH-TW3000 be the machine to change all that?

It certainly impresses in terms of specification and performance. This LCD projector has a 1920 x 1080 resolution, ensuring 1080p Blu-ray content can be handled directly from your source without any need for scaling.

Epson claims an 18,000:1 contrast ratio and a brightness of 1800 lumens, while in ‘whisper mode' the projector should run at a quiet 22dB.

It's also quick and easy to set-up. Two control wheels on top of the unit adjust the picture, and while they could be a little smoother to operate, we soon get the image we want.

Focus and zoom controls on the lens itself allow us to put the finishing touches to the picture. It's fair to say we usually don't expect much in terms of style or build for this money, and true to form we're left underwhelmed, although the shell feels solid enough.

Clean high-definition images
We take a look at the Blu-ray of Death Race and the Epson delivers decent contrast levels, with fairly dark black levels proving a solid base for a decent array of bright, vivid hues.

There's not the extra level of attention to detail that the best-in-class deliver, meaning blocks of colour don't quite have the same texture and three-dimensionality, and while overall insight is good, it's not startlingly so.

Switch to the BD release of Gomorrah and while the picture is clean and free of noise, there is a softness to edges, meaning acute details aren't quite as sharp as we'd like.

This is apparent with fast motion too, where the trickiest of test scenes cause a slight loss of control.

It's more of the same with DVD, where pictures are largely satisfying thanks to a clean, colourful rendition, but it's just lacking the extra level of finesse displayed by the Panasonic PT-AX200E and Sanyo PLV-700 models.

Not for the first time, this Epson has not quite done enough to find itself at the top of our roster. Nevertheless, it's a solid all-rounder and worth investigating, not least if you spy it at a knock-down price.