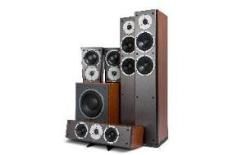 In theory, this system should sound like a cracker but in practise everything doesn’t gel as well as we’d like

We've already tested speakers from Dynaudio's Excite range and we like them. Indeed, the front speakers in this Excite AV package, the Excite X32 floorstanders (£1590), recently won a gong in our 2008 Awards.

This is the first time we've heard them as part of a surround sound package. The other Excite speaker making an appearance is the X22 centre channel (£475).

This uses the midrange drivers found in Dynaudio's top-of-the-range Excite floorstander, the X36, as its mid/bass units, and the same tweeter used in all Excite speakers. To aid the angle of sound dispersion, the X22 comes attached to its own angled plinth.

Due to the absence of dedicated Excite surround speakers, the rear left and right speakers in this set-up are taken from Dynaudio's Audience range.

Wall-mounted rear speakers
The Audience 42Sats (£500) have been designed with wall-mounting in mind and come with their own fitting on the back. They use a 15cm woofer and a 28mm soft-dome tweeter. If you fancy more expensive surround speakers, you could opt for those found within the company's Contour range.

Bringing up the rear or in this case, the bass, is the SUB300. This subwoofer uses a 250W amplifier and 24cm driver and features CEC (Cone Excursion Control) technology.

Dynaudio claims that it allows the sub to go deeper, louder and deliver greater dynamics. The SUB300 comes with a credit card remote control that allows you to alter various settings, including phase, level and crossover.

Additional flexibility come in the way of four individual presets should you want to vary the sound for certain types of movie or music.

You might think that, because the satellite speakers are from a different range, they could be a weak link.

Yet they're the perfect complement. They spread the sound around exceptionally well and offer a detailed insight into movie soundtracks. In fact, all five speakers in this package dig up impressive levels of detail.

Solidity, yet a lack of authority
The X32s are clear and concise. This helps them to juggle the frantic dialogue and action scenes of Band of Brothers without any hiccups.

There's a fine sense of solidity to the sound, but at the same time there's a lack of weight and authority. The main culprit is the SUB300, as it fails to reinforce low frequencies.

Play around with the settings and you can boost weight, but the trade off is a loss of control and definition. What's more surprising is the lack of cohesion between the front three speakers.

The sounds from the fight in Hancock between Will Smith and Charlize Theron don't flow smoothly between the channels and you're left with holes in the sound field that should be filled with immersive surround sound.

With this Dynaudio package, all the elements are in place for a great-sounding system, but there's a lack of quality bass and overall, it doesn't knit together as seamlessly as we'd like.