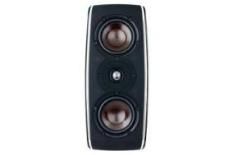 The Motifs go most of the way to providing a great-sounding, good-looking solution

Discreet cabinets with full-size sound and svelte good looks without sonic compromise: that's what everyone wants from a stylish speaker package, isn't it? A quart from a pint pot, in other words. Dali, whose recent record with full-size speaker packages is enviable, thinks its Motif speaker is just the job.

Currently, the Motif range comprises precisely one speaker, fortunately designed to see service in any of the five or seven positions in a multichannel set-up – the Motif can be positioned vertically or horizontally thanks to its clever bracketing.

The big hole in the system is a lack of dedicated subwoofer – there's a Motif sub planned for the near future, but for this test we're using Dali's splendid Ikon subwoofer. Of course, you're free to use a different make if you prefer.

Time will tame the Dalis
Straight from the box, the five-channel system we're testing sounds hard and unyielding – there's little of the even-handedness we've so admired in other Dali products. Left to play in peace for 24 hours, though, the Motif comes into its own.

Playing the excellent Dolby TrueHD soundtrack to Cars, the Dalis are revealed as an attacking, rapid listen. Effects are pinned ruthlessly to the soundstage, fast-moving effects gripped and steered with authority, and barely there transients are served up in full and on time. The midrange communicates explicitly, allowing dialogue plenty of freedom of expression.

This stern attitude is carried over to music reproduction, the Dalis offering enviable pace and dynamic headroom to Buck 65's Talkin' Honky Blues. Details are retrieved and frequencies integrated without alarms.

The one real flaw in the Motifs' performance is, unfortunately, the very flaw that we think style speaker systems should guard against above all others: at volumes from ‘exuberant' upwards, the Dalis harden the upper frequency range to an uncomfortable degree. Cymbals that are pleasantly crisp at realistic levels become cutting and abrasive, and gunfire becomes as painful as being shot for real.

It's just one failing among a big list of positives, but it costs the Dalis their fifth star.