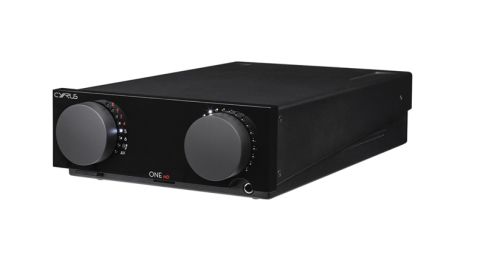 While dynamic range and rhythmic precision still aren't perfect, the One HD improves on the standard version and adds more features

There wasn’t much at all to dislike about the standard Cyrus One. Homage to the British manufacturer’s first product of the same name, it was (and still is) a feature-packed, solidly detailed and punchy performer.

So the addition of an upgraded circuit design, built-in 32-bit DAC and digital inputs makes the Cyrus One HD an enticing upgrade.

Our only hope prior to testing is that Cyrus has taken the opportunity to address its predecessor’s lack of dynamic and rhythmic flair at the same time.

Those digital inputs comprise optical and SPDIF, there’s USB for wired connection to a laptop and the Bluetooth is upgraded from aptX to aptX HD, offering ‘better-than-CD’ wireless connectivity.

That’s in addition to the three line level analogue inputs – one of which has an AV bypass for optional use as a home cinema power amp – built-in MM phono stage and 6.3mm headphone amp of its predecessor.

But for those extra inputs and corresponding channel selections, the design is near identical to the Cyrus One’s previous incarnation.

Two bold and tactile dials dominate its fascia with a bug-eyed expression, while the connections – including two pairs of speaker terminals – are reserved for the back of this sophisticated-looking Class D amplifier.

Given the consistency of the two designs, it’s little surprise the strengths of the previous One’s performance remain as well.

Though we don’t have the original for direct comparison, sitting this new incarnation between a Cyrus CD i and our reference ATC speakers – at first using its analogue inputs –returns a presentation just as we remember.

It’s clean, open and detailed, taking delight in the texture and timbre alike as we begin our testing with Radiohead’s OK Computer. That solidity is there, too, offering body to Thom Yorke’s vocal and real presence to its accompaniment.

Cyrus also keeps intact its reputation for an even balance. There isn’t heaps of low end shaking the floorboards, but it’s far from being lightweight. The sweetness is mirrored in a typically rich and unrestrained treble.

Switching to digital via its SPDIF connection, each of those facets appears to have been improved upon.

The performance is generally more confident and more assertive, with the assuredness to dig deeper into the detail while concurrently giving the record more space to breathe.

The Bluetooth upgrade has also been worth Cyrus’s while. Of course that ‘better-than-CD’ quality is dependent on your source, but streaming the same music from Tidal does not give us the downturn in performance that would have us scrambling for the disc with previous Bluetooth technologies.

But just as the Cyrus’s strengths are consistent with each input, so are its weaknesses – and it’s those same deficiencies again holding the One HD back from realising its five-star potential.

While its sense of timing and dynamic range are not so bothersome as to have us switching it off, it remains a straight-laced performer that lacks the excitement and expression available elsewhere.

Using the Rega Brio as an example – which, although almost half the price at £600, is a straight analogue-only stereo amplifier – we get sense of just what kind of a performance is available for this sort of money.

More than rhythmic patterns being simply tightened, a firmer grip on dynamics gives leading beats impetus where with the Cyrus it all feels a little more restrained.

Dynamically, there are auxiliary phrases that the Rega gives life and a longer leash in terms of self-expression.

We’ve heard plenty of amplifiers that sound boring, and we certainly wouldn’t go as far as describing the Cyrus One HD thus, but it still falls short of the Brio in terms of all-out entertainment and all-round performance.

But what the Rega can’t do as a competitor is offer you everything that’s built into the Cyrus. Throw in an Arcam iRDAC II (which includes Bluetooth capability) and you remain in range of the One HD’s £1000 price tag, but then you aren’t getting a tidy, just-add-speakers, one-box solution.

Cyrus might not have righted all the wrongs of the standard One amp, but it has created yet another good product.