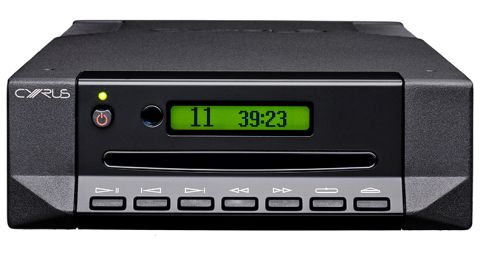 A five-star CD player from Cyrus is no surprise, but this one takes things to a new level

Cyrus hasn’t put a foot wrong with its CD players for as long as we can remember. It’d be fair to say that its track record has been phenomenal.

So it’s no surprise that the new Cyrus CDi – the successor to the Cyrus 6SE and Cyrus 8SE – is another gleaming example of the company treading the right path.

In fact, Cyrus says this is its best-sounding CD player yet. And, as much as we’ve loved the company’s previous models, we’re more than happy to back that claim.

Even after a very short listen, we are convinced of the scale of Cyrus’ achievement here.

We played Hans Zimmer’s Dream is Collapsing from the Inception soundtrack and right away the CDi displayed the uniform, articulate and intuitive presentation that we’d expect from a more expensive player.

Offering buckets of detail, the finer flurries of quieter instruments surfaced, while the more intense parts of the score soared into a dramatic climax.

Each layer of the composition was precisely unpeeled, and each instrument passed through the mix with coherent flow and tact.

But the rhythmic talent here is what really raises our eyebrows. Pace and momentum is exercised with articulation and vibrancy.

We found ourselves entertained by the Cyrus’ dynamic agility and neutral balance in a way that’s rare at this price.

Though fast and fluid, the sound is much weightier than any of the company’s previous models.

Even when we switched to Timbaland’s Morning After Dark – which has a fleshy, hard sound, heaps of sub-bass and thumping beats – the CDi didn’t bat an eyelid.

As if that weren’t testing enough, we dug out a live recording of Linkin Park and were equally impressed at the amount of clarity and definition it extracted against the background crowd noise – even if the spacious soundstage seemed a bit forsaken.

We may not have heard quite this calibre of sound from a Cyrus player before, but we’ve become fairly accustomed to the blueprint design of its machines.

We generally like its solid build, fuss-free design and simple, easy-to-read black-on-green display – though the latter now looks thoroughly outdated in today’s market and could do with a rethink.

In earlier SE models, we found the cheap-looking plastic remote a noteworthy negative, so we’re rather pleased that the new one is more in-keeping with rival players’ handsets, boasting a plush and organised set of backlit buttons.

The company says that the CDi shares similar features to its latest CD transport, the CD Xt Signature.

This means having a slot disc loader, a more stable clock and the latest version of its customary Servo Evolution disc-reading engine, which relies more on reading the data correctly the first time than on error correction to colour in the blanks.

The company claims the new transport now has as much as 20% fewer CD reading errors than any other off-the-shelf alternatives it found – and the amount of detail it grabs from the music goes a long way to prove it.

The new transport is, however, a little noisy when loading a disc, though as silent as you’d hope it would be during playback.

Found at the back of the system are two pairs of analogue outputs and standard digital optical and coaxial outputs.

True to Cyrus fashion, upgrades can also be achieved by connecting to the company’s PSX-R external power supply (£500) for naturally more power, clarity and detail.

But we’re certain you’ll be happy with the CDi alone for a long time to come.

We’re hugely impressed with the CDi and we’re confident you won’t find a more entertaining, more revealing player until you near the £1500 mark.