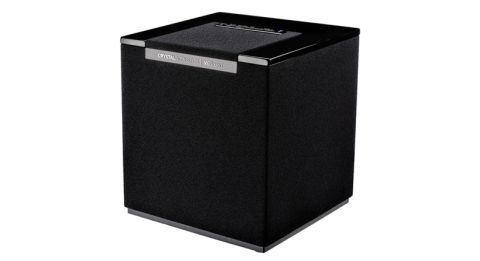 A good idea, but sound quality needs to be better

What does WiSound do? Basically, it promises that you’ll hear the same sound wherever you are in the room. Goodbye to your traditional stereo speakers and their ‘sweet spot’, the theory goes. Crystal Acoustics argues that fewer people listen that way nowadays and instead opt for single-box wireless speakers placed on shelves and tables.

WiSound works by blasting sound upwards, forwards and sideways from drivers of varying sizes. This aims to create a balance between direct sound (straight from the speaker) and sound reflected from your walls and ceiling. As the product name suggests, there are seven drivers: four on top, two on the side, and one at the front. And it works.

Crystal Acoustics claims you’ll get the same sonic performance and tonal balance wherever you are in the room, and we find this to be true. We set the speaker up in a medium-sized room (not far from walls) and walk around the speaker as it plays.

The sonic characteristics do not change noticeably. There is not more detail over here and less bass over there. The performance is not a narrow beam of sound, but rather a spacious and enveloping dome. There is something rather pleasing about the freedom to uncouple yourself from the sofa and walk around while listening.

As far as the company’s claims are concerned, it’s mission accomplished.

Unfortunately, that does not take into account what those sonic characteristics are. We hear the same sound wherever we are in the room, but we find that sound a little disappointing. There is a lack of organisation.

Whatever we play, we struggle to single out and follow all the individual strands of music. Instruments jostle for our attention, rather than performing as a cohesive whole. Then we have the matter of definition, the Cuby 7’s other significant weakness. Leading edges feel a bit blurry. The bass is a little soft. It is difficult to identify the instruments in play, particularly when they’re scrabbling for your attention.

Tonal balance is fine. There’s a good amount of everything from bass upwards through to midrange and treble. But the quality of anything above the upper-midrange is harsh – and that’s despite many days of running in.

These are not issues we’ve experienced with similarly priced rivals such as the Monitor Audio Airstream S200 or Geneva Model M Wireless. Neither of those speakers can replicate the Cuby 7’s positional flexibility, but both offer far greater clarity and definition, not to mention punchier dynamics.

We’re also not especially keen on the design of the Cuby 7. Even considering the changeable top plate (also available in red or white), we can’t escape the fact that it has the look and size of a small subwoofer.

It is well made, however. The remote may be disappointingly plasticky, but the main unit feels nice. There is a reassuring weight and solidity to the Cuby 7. It also has a decent collection of physical inputs (RCA, 3.5mm and digital optical).

Of course, if you really want to make the most of your freedom to roam, you’ll be best off using the aptX Bluetooth connection. And that is solid, with pairing proving swift and the connection reassuringly stable.

The Crystal Acoustics Cuby 7 succeeds in its goal of giving you the same sound wherever you are in the room. Unfortunately, that sound is a touch underwhelming. It’s a good idea, but the overall package needs a bit of work.