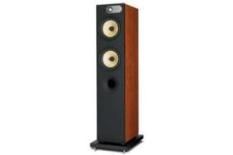 Entertainers in the grand manner, the 684s remain likeable and admirable in equal measure

We've played B&W's 684s for comparative purposes plenty of times since they comfortably retained their five-star status in a Group Test back in November 2008.

This, however, is their first major test since then.

But this is the company whose PV1 subwoofer has won six What Hi-Fi? Sound and Vision Awards on the spin, so we shouldn't be startled by the longevity of some B&W products.

Can they retain their favoured status?
Visually, they remain quite dramatic – bug-eyed yellow drivers, asymmetrical tweeter arrangement and soft-touch front baffle – but the overall standard of finish is nothing special.

They're far from poorly made, you understand, but the square edges and vinyl wrap look and feel a little prosaic compared with some of their peers.

In pure audio terms, though, the 684s are giving little away to these competitors. Pere Ubu's 30 Seconds
Over Tokyo sounds urgent and authoritative, delivered on a room-filling scale and organised stringently.

The low frequency clout the looks allude to is present in spades, tidily timed and tonally expressive, and the yelping vocal in the midrange is packed with character.

This enthusiasm extends to the top of the frequency range, where the B&Ws attack with great control.

Age has not withered them
The scale and scope of the 684s' presentation is even more pronounced when playing The Shins' Gone For Good.

They may lack the last shred of fine detail compared with the very best of the competition, but their honeyed midrange and sheer brio more than make up for that.

Sturdy and punchy, and both deft and agile too, these B&Ws can turn their hand to just about anything.

In short, this is another B&W offering that was so splendidly realised in the first place that it demands consideration years down the line.

In simple bang-per-buck terms, they hold on to those five stars as securely as they ever did.