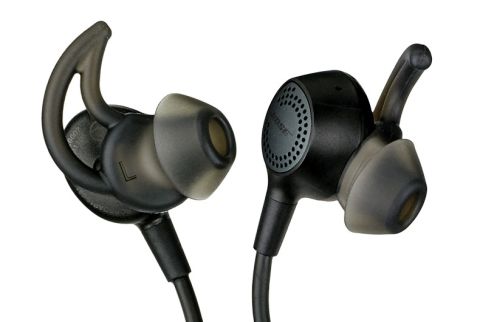 By blocking outside noise, you can focus on the QC30s’ great sound

No matter how much you spend on a quality pair of in-ear headphones, the one thing you can’t control is noise from the outside world.

They may have the best sound going, but with most headphones, your tunes will be accompanied by traffic noise or office chatter – unless of course, they can block it out. And Bose QuietControl 30 in-ear headphones are a top-notch blocker.

While their design might not suit everyone, their noise-cancelling functionality, and their sound quality, is most definitely up to scratch.

There are two ways to control the QC30s' noise-functionality: through the smaller, arrow buttons on the side of the playback control module, or through Bose’s easy-to-use iOS and Android app.

Both methods allow you to control how much noise you want the QC30s to cancel out, hence the name QuietControl. Most people will probably choose to have it on maximum, but if you’re out running and want to hear traffic noises, for example, you can change the settings to allow some noise to seep in.

Both inside and out, the QC30s eliminate background noise effectively. We try them in our office without music playing and much of the background chatter is muted.

Though we can still hear nearby conversations, these are quickly drowned out once we started playing something.

Connecting to a phone or laptop through Bluetooth is simple, and the QC30s are also NFC compatible.

The microphone on the side, and multi-touch button on the module, means you can activate your phone’s voice assistant and make calls too, alongside the expected playback controls.

There’s a micro-USB slot on the neckband for charging the headphones – according to Bose it should take around three hours to charge, and once fully-charged, the battery is good for a claimed ten hours.

While we can’t fault their features, the design of these headphones is a little divisive. Some of the What Hi-Fi? team find the earbuds difficult to fit, while others think the plastic collar that hangs around your neck is a little too heavy.

It’s tough and flexible enough not to worry about it snapping, but also liable to rub against your neck if you’re wearing a t-shirt. We’d try them out for a day or so before making a solid decision.

On the QC30 sound quality, however, the team is in complete agreement – and to Bose’s credit, that’s because it’s very good. The QC30s have an impressively spacious presentation.

The separation between the timid piano and breathy, haunting vocals of Perfume Genius’s Mike Hadreas on Otherside is big enough to maintain the song’s innate fragility.

When the burst of electronic synths and tinkling sound effects hits in the middle of the track, the QC30s keep the song organised so the sounds don’t blend into each other.

It has no problem with the song shifting gears, taking in the rise and fall in volume as it moves from quiet pings to exuberant explosions.

In the bass and the midrange there’s plenty of detail, capturing the distinctive texture of the drum in The White Stripes’ Seven Nation Army and the loose, reverberating twangs of the guitar that hang in the air well.

There are no doubts about its punchiness either, as each whack of the drum strikes your ear with a good sense of force and energy. It has a sure-footed sense of rhythm too; keeping up with high speed metal as well as it does orchestral pieces.

Tonally, the QC30s strike a good balance across the frequencies, with the bass, midrange, and treble pretty well composed. Occasionally, the bass edges forward too far, but not enough to spoil their great sound.

If we’re being picky, the £170 Sennheiser Momentum Wireless In Ears perform marginally better in terms of pure sound quality, but they lack the impressive noise-cancelling abilities of the QC30s that sets them ahead of the competition.

These headphones hit all their targets: great sound quality, impressive noise-cancellation and good comfort (for those that like their design). It’s another five-star pair of chart-topping headphones from Bose.