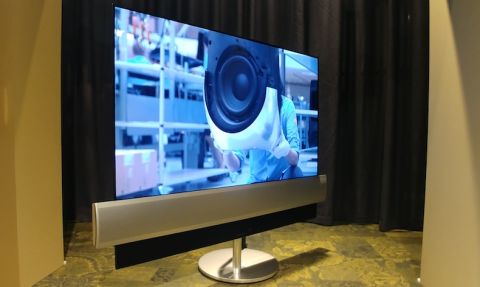 Take a look at B&O’s portfolio of speakers, wireless speaker systems and televisions: you’ll see compromise doesn’t appear to be in its blood. So when it came to designing its first 4K OLED TV, the Danish brand wasn’t going to half-heartedly sacrifice sound quality for slimness, or picture quality for competitive pricing. And it wasn’t going to go it alone, either.

Like every other TV brand in the OLED arena last year, B&O acquired a 2017 OLED panel from LG for its BeoVision Eclipse. But in a further act of dependency, it has taken an extra helping hand from the Korean giant – the Eclipse benefits from LG’s 4K processing and smart webOS platform too.

It’s a smart move, as it has allowed B&O to leave the picture performance to the big hitters and focus on what it does best: sound. And here B&O’s input is far from trivial. At the heart of the telly is its SoundCentre, a soundbar-like speaker (comprising six drivers powered by a total of 450 watts) integrated across the bottom of the screen.

The Eclipse supports much of the latest TV technology, as it should for this price. OLED, 4K, HDR10, Dolby Vision and HLG are all included, meaning you can binge on 4K and HDR content across both Netflix and Amazon. It is also compatible with any Ultra HD Blu-ray player, 4K set-top box or 4K broadcast through its four HDCP 2.2-certified 2.0 HDMI sockets.

Although the Eclipse hardware supports HLG, it is currently redundant as its iPlayer app doesn’t have HLG support - so Eclipse owners can’t stream the recent Blue Planet II series in 4K or HLG.

Using LG’s latest WebOS 3.5 system means two things for the Eclipse. Firstly, it’s a smooth and intuitive operator - the tiled pop-up menu may look a little over-friendly for a TV of this high-mindedness, but at least the features and menus are reasonably sophisticated.

Secondly, it’s fully equipped with app support, meaning it has everything you’d expect from a premium TV: every UK catch-up service (iPlayer, ITV Player, All4 and Demand5), Netflix and Amazon Prime Video.

To make the most of the SoundCentre and put the TV firmly at the front of your AV system, it has also music covered: Spotify Connect, Deezer and internet radio, as well as streaming via AirPlay, Bluetooth, DLNA and Chromecast built-in.

Network streaming can be achieved through the B&O app, as can TV operations. But we wouldn’t pass up the opportunity to use the supplied BeoRemote One BT remote – it’s an indication of the Eclipse’s premium status. The tall, narrow tool is a step up from even the best smart wands often packaged with flagship tellies.

That extends to features too. Not only does it have handy shortcut keys for both Netflix and Amazon, but you can add a source – a Blu-ray player or streaming service – as a shortcut simply by holding down its ‘My Button’ key for three seconds.

B&O’s work-of-art design ethos is evident here. The Eclipse has a motorised stand option, alongside static stand and wall installation options. But all eyes are drawn to the Eclipse SoundCentre, which cuts across the bottom of the screen as subtly as a breaking newsflash.

The choice of fabric or perforated anodised aluminium front is typically B&O, and it sure does make a statement. While not everyone will be partial to its rather striking design, its heft is necessary to achieve this B&O’s sonic supremacy.

Compared to most TVs on the market, the SoundCentre is impressive in size and specs. It features a 25mm tweeter, two 6cm full-range drivers and three 10cm midrange/woofers, which together are driven by a total of 450 watts of power.

The midrange/woofers are placed closely together in the centre of the SoundCentre, for more directional and focused midrange ­– an arragement B&O favoured during the development of its mighty BeoLab 90 speaker.

With a built-in 7.1 surround-sound decoder, the Eclipse’s centre channel performance can sonically match up to eight BeoLab speakers used as surround channels – and wirelessly, too, thanks to the Eclipse’s built-in transmitter. There’s a dedicated BeoLink tab in the sound menu for set-up and, naturally, such a link means the Eclipse could be integrated into a multi-room set-up.

While we couldn’t create a BeoLab system in our hands-on test, the SoundCentre’s individual performance tells us much of what we need to know. Most surprising is how deep its modestly sized woofers can dig into low-end frequencies.

In Netflix’s Stranger Things, the ominous undertones that score the lab scenes have real anchoring weight, and dramatic typewriter punches come through thick and fast. We head to sci-fi fantasy film Okja and, when the giant superpig lands in the pool, it does so with a significant thud.

Vocals have greater clarity and more body than we’ve come to expect from TVs, too. We’d like to get the Eclipse in a room next to some of our favourite high-end soundbars, such as the Dali Kubik One and Sony HT-ST5000, to see how they compare dynamically, but in its own right the all-in-one audio system performs well enough to satisfy anyone who doesn't hanker after a traditional surround sound package.

Considering the impressive record of LG’s 2017 TVs, it’s hardly surprising the Eclipse fares well on the picture side too. Blacks are as true as the panel below the speaker, and good levels of detail can be found within them.

The white-on-black subtitles in Okja are the first obvious sign of its impressive contrast, followed by the bright sun-rays shining through darkened jungles. The colour reproduction is as true to various shades of lush greens in the jungle, and those of the greys in Seoul’s concrete jungle, as it is skin-tones.

Even in a well-lit room, the Eclipse manages to maintain enough brightness and pop to its palette without sacrificing contrast. It looks on a par with the best 2017 OLED sets (although if our recent previews at CES 2018 are anything to go by, this year’s models look set to raise the bar yet further).

Our familiarity with LG panels and processing means we aren’t surprised to find ourselves experimenting with the picture settings from the off. We temper the contrast and brightness slightly and turn off the rather bold motion-setting mode, which we find adds distracting artefacts even with minimal motion. Making incremental jumps in the custom de-judder and de-blur settings are much more preferable.

The BeoVision Eclipse is essentially a better-sounding 2017 LG OLED TV wrapped in B&O clothing. And thanks to its lovely picture, class-leading sound and extensive features (the current lack of 4K HLG iPlayer support aside), it’s competitive across the board. Except where price is concerned.

The 55in screen model costs four times the current price of the Award-winning LG OLED55B7V, and while it’s a decent sounding television you can also buy some serious speaker kit for a fair bit less than the balance.

But for anyone after a solid all-in-one audio and visual performer that doesn’t require the fuss of a separate soundbar or traditional surround package, this may well be a better option. Or perhaps if you already own BeoLab speakers and have the money to splash put on a decent television, you may well be able to justify the cost.