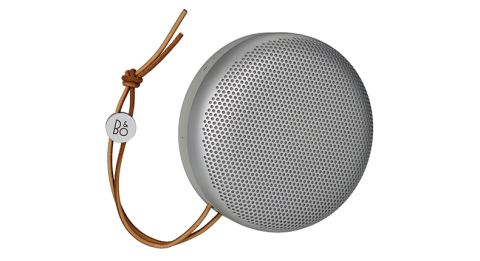 It’s not the most thrilling sound, but the BeoPlay A1 is a solid and detailed performer that brings luxury performance into a lower price bracket

If the B&O BeoPlay A1 came up in a round of Pictionary, it wouldn’t be long before contestants were calling out ‘lilo pump’ and ‘smoke detector’. With its perforated, circular dome-like casing and dangling B&O trademark leather strap, ‘crumpet with a jam trail’ would also have been a reasonable punt.

It has been over a year since B&O entered the portable Bluetooth speaker market with the A4-sized BeoPlay A2, which was something of a surprise considering the brand’s reputation for specialist, high-end products, and here we have an even smaller and more affordable speaker.

If you’re wondering whether this price point has finally tested B&O’s reputation of delivering quality builds and designs, let’s nip that in the bud for you: it hasn’t.

Unlike most portable speakers (including the BeoPlay A2), the palm-sized A1 – available in moss green or silver – is made of aluminium, with just a polymer base. It’s not just the weight – at 600g, it’s heavier than it looks – that indicates lavishness; it looks and feels lovely.

The real leather strap, ideal for carrying the speaker to the park, attaching it to a rucksack or hanging it on a tree branch, only reinforces that.

The design team’s brief was to come up with something that couldn’t snag a bag or have protruding buttons that could be accidentally pressed. It seems to have worked, for the compact, rounded A1 is smooth all round and largely unspoiled.

Sockets, of which there is just a single 3.5mm input and USB type-C for charging, and embedded buttons for power, Bluetooth and volume are spread neatly across the waistband.

A circle symbol button, once pressed, will also reconnect it to the last paired device and continue playing where it left off, and B&O’s literature says it’ll gain extra powers with future updates.

That could be made available through the BeoPlay app – available on iOS, with an Android version on the way – which can also be used to pair two A1s together, to play in stereo (one acts as the left channel, the other the right) or in unison for a multi-room set-up.

There’s a built-in microphone for taking calls too, and B&O claims that the rimmed design on the speaker’s bottom edge aids vocal dispersion.

A 2.5-hour charge offers an above-average 24-hours music playback at reasonable volume levels, so it should certainly outlast your smartphone.

We pair through our LG G4 smartphone via (aptX) Bluetooth (note, the A1 doesn’t support NFC) and let the 20mm tweeter and 9cm driver go to work as we play Wildbirds & Peacedrums’ Peeling Off The Layers.

It’s immediately clear that B&O has put its heart and soul into producing a sound that’s a million miles from your tinny, feeble smartphone speakers. The presentation is rock-solid, full-bodied and pushes sound wide enough so that you don’t have to turn the volume up to hear it loud and clear from across the room.

There’s decent heft behind drum rolls, and the A1 digs down deep enough to communicate the reverb behind some strikes – something that the more affordable UE Roll struggles with.

The midrange is substantially propped up; the interplaying vocal is solid and soulful as it snakes between the cadenced percussion, and projected with confident clarity.

The treble is crisp yet unshakable – even when we play The Rapture’s Echoes it manages to avoid sounding like a cat scratching at a window – but it’s the other end of the frequency range that really grabs you.

The walking bass line in Timber Timbre’s Magic Arrow has surprising potency for a speaker of its size, and electrics are properly guttural. If anything, it’s a little on the rich side, so playing anything from Jamie xx or Massive Attack at a decent volume makes the A1 (and the table it’s sat on) dance along with you.

It’s not quite the whole package, though. Play the former’s I Know There’s Gonna Be (Good Times) and you wonder where the A1 has left its party hat. Lacking the UE Roll’s sit-up-and-listen snappiness and effused rhythmic handling of the synthesized steel drums, it sounds a little subdued in comparison.

But while needing to better negotiate its weighty, solid sound with more sparkle and attack, the A1 does stand out in the smorgasbord of quality that is the portable Bluetooth speaker market, with good (and practical) looks, generous battery life and a clear, full-bodied sound.

It may bring B&O’s entry-level price down, but doesn’t drag its hardy reputation down with it.

Buy the B&O BeoPlay A1 here