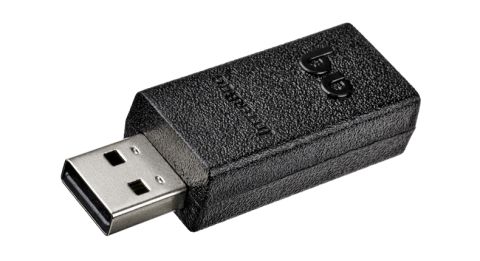 Upgrading your hi-fi system needn’t always involve a hefty blow to your wallet. There’s always an affordable little tweak here and there, which can make a world of difference.

With a traditional hi-fi set-up, it could be something as simple as upgrading your speaker cable or interconnects. With a desktop audio system, it could be introducing a little critter like the AudioQuest JitterBug.

Slightly larger than your average USB memory stick, JitterBug is a little bit shorter and chunkier than the company’s excellent DragonFly USB DAC.

It plugs into your computer’s USB socket, acting as a link in the chain between your computer and DAC, whether it’s a standalone converter or housed in a headphone amp or traditional stereo amp.

The thinking goes there’s a lot of noise and interference coursing through the circuitry of your average desktop computer or laptop, including its USB connections. The main source of this interference is your computer’s own power supply.

AudioQuest claims this noise and interference can pass into your DAC through both the power line and data lines of a USB port. Jitterbug’s job is to act as a passive filter and dissipate any noise before the signal enters your DAC.

So does it work? Well, we tested Jitterbug with a number of different products and varying qualities of source material.

We kick off with AudioQuest's own DragonFly USB DAC hooked up to a MacBook Pro. Fed a CD rip of Red Hot Chilli Peppers’ Don’t Forget Me, there’s more meat on the bones of the opening guitar riff, there’s more solidity to each note and you can hear the subtle differences as different levels of force are applied to the strings.

Drum thwacks hit with even more conviction, punctuating the track in all the right places without disrupting its rhythm. There’s also more detail and insight to the echo and reverb that halos around Anthony Kiedis’s vocal.

Each piece of the sonic jigsaw is there and you’re presented with a rich, detailed picture, even if you swap to a 320kbps Spotify stream of the same track.

Take JitterBug out of the chain and you’re back to square one. The song sounds vague in comparison. Those punctuation marks and leading edges are all less pronounced. The clarity is replaced by a murky fog and as a result, rhythms are harder to follow. It’s like the difference between having a hangover and a clear head.

We step up a level to the Award-winning Chord Mojo and a similar pattern emerges. This time we switch tracks to The Border, taken from the soundtrack to gangster flick Sicario.

The track sounds dramatic enough without using the JitterBug, but slot it into the system and all the tension and drama goes up a notch. There’s immense power and solidity, to the pulsing drumbeat, which is topped off by string instruments piercing the soundstage.

There’s a level of dynamism and attack on display that goes missing when JitterBug bugs out. The whole track oozes tension, you don’t need to know the corresponding scene from the movie to realise the seriousness of the situation.

Even with more laid-back tracks such as The 1975’s So Far (It’s Alright), you can hear the Jitterbug have an impact. The dynamic shifts between bass notes sounds much clearer and lucid. Percussion has more of a cutting edge and sparkle.

The next step on our journey is the Mojo’s bigger brother, Hugo. And it’s here where the story takes a tiny twist. The general improvements in sound quality are there. The increased robustness, the upsurge in dynamics and the clarity are all present and correct.

We just find music doesn’t flow quite as effortlessly.

It’s as if the extra weight and solidity stunt music’s natural flow. We’d recommend experimenting to see how it works with your particular ensemble.

It’s a strange one, especially when we swap the Hugo for the DAC input of Cambridge Audio’s Azur 851N streamer. Any previous questions we had about timing evaporate and once again, the positive status quo is resumed.

The XX’s Heart Skipped A Beat doesn’t miss a beat. The track sounds punchier and more precise than ever. Clarity goes up a notch soundstage opens up and the his ‘n’ hers vocals hang beautifully. Shifts between high and low dynamics are more explicit and the track displays a new-found sparkle.

AudioQuest even claims that using two JitterBugs in parallel can make a difference, but in our experience we found using just one to have much more of a significant impact.

Nine times out of ten we’d rather have a Jitterbug in our system than leave it out.

If it fits your current set-up, we’d certainly recommend taking one for a spin – it’s a clever, audio-improving critter.

See all our AudioQuest reviews