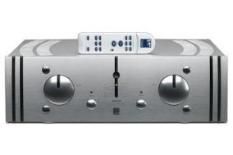 No, it's not a rumour. ATC does make other kit besides speakers.

While the company's speakers tend to get stick for looking rather unadventurous and, dare we say, dull, such an accusation can't be aimed at the stunning SIA2-150 integrated amp. Subtle and understated it isn't.

This one-box beast dwarfs comparable pre/power combos we've seen. Just to give you an idea, the chassis is both deeper and taller than a stack of Naim electronics.

It also packs a punch on power ratings with a sizeable 150W per channel. And, at 20kg, the ATC is a heavyweight physically too.

This is a lot of amplifier for the money, but you wouldn't think that from the remote. It's a cheap, plastic affair and not really in keeping with the machine it controls. But it's functional enough all the same.

ATC decided not to fill the large back panel with all manner of inputs and outputs. Instead, just the basic connectivity options are here, including four line level inputs, a tape loop, a single set of speaker terminals and, usefully, a 6.3mm headphone jack.

Superlative soundstage
We're constantly praising the natural, emotive tone of ATC's speakers and the SIA2-150 sounds like it has been cut from the same cloth.

This amp allows for a wonderfully open soundstage through which detail can shine. The choir in 160 BPM, from the Angels & Demons OST, can sound muddied and grubby through poorer amps, but the ATC opens up the track, bringing in real clarity and insight.

The amp displays great power, drive and determination as the track builds up. Not only are the edges of notes superbly defined, but there's great texture and feeling behind each one.

Listen to the Red Hot Chili Peppers' Live in Hyde Park CD and the ATC even conveys the sense of emotion from the crowd noise.

It gets across the fantastic atmosphere at the concert even before the band launch into Don't Forget Me.

The ATC produces a spine-tingling connection between the listener and the music, not just with rock, but whatever your musical poison.

ATC has set the bar extremely high with the sensational SIA2-150, and that's no mean feat…