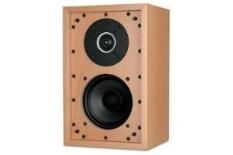 The BBC LS3/5A – originally designed for BBC outside broadcast vans – was a little monitor hijacked by the hi-fi community who fell in love with its natural sounding midrange and impressive imaging.

The original hasn't been built for years, but there remains a market for such a design, and the SM35A is Arcaydis's take on it. The name, look and dimensions are more than reminiscent of the original LS3/5A; so is the sound.

There are certain things they can't do. They won't go massively loud, so if you want something that will play at party levels look elsewhere. It's only a small box, too, measuring just 30cm high, so very deep bass is off the menu.

Unlike many modern speakers, this one can to go close to a rear wall or even a bookshelf (if you must). Place it on some solid stands, and you'll hear one of the sweetest, most fluid midranges available below the £1000 mark.

Adele's 19 set comes through with breathtaking naturalness, with her voice focussed sharply between the speakers. When it comes to projection and subtlety, there are few rivals that do better.

Decent bass for a small box
Move down the frequency range and you'll find the SM35A does well for its size. As far as they go, bass frequencies are delivered with weight and authority, though these speakers would never be our first choice for listening to the likes of Massive Attack.

Tonality is well judged, though by the standards of the best of the class transparency isn't quite top notch: there are slight colorations that stop these speakers sounding as pure as they should. Still, these are relatively minor in nature and easy to get used to for most listeners.

These SM35As aren't for everyone, but if you listen to predominantly vocal-based music or smaller-scale acoustic works, we think you'll love them.

And, when you consider the same could be said of the BBC original, we think Arcaydis has done a fine job.