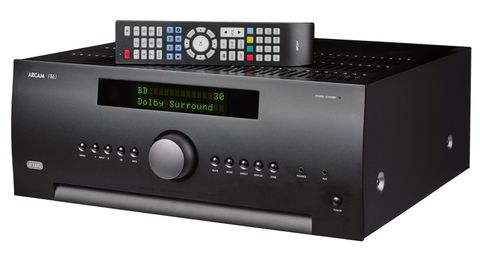 A well-designed amplifier with great detail and organisation, but needs more punch

The AVR390 is Arcam’s attempt to bring the performance of its high-end AV amps to a more affordable level by taking the unusual approach of copying the front-end circuitry, the pre-amp section and all the processing straight from the company’s £4500 AVR850 and putting it into this new system.

To meet the £2000 price point, something had to give; in this case, it’s the power amp section and the power supply which Arcam has toned down to lower the AVR390’s cost.

The company has swapped the AVR850’s expensive and complex Class G power amplification for the more conventional Class A/B alternative.

Accordingly, power output has gone down – from the AVR850’s 200W maximum to 80W (when driving two channels between 20Hz and 20kHz)

The power supply is also far less elaborate and downgraded in terms of capacity, and it’s because of these changes that this amplifier can provide all of the major features of Arcam’s top products with only half of the price tag.

The highlight of the AVR390 processing prowess is the ‘Dirac’ auto setup software which is designed to set-up and optimise your speakers’ performance in your listening room accounting for size and room acoustics.

The AVR390 doesn’t have the processing power to perform the initial calculations, so the Dirac software needs to be downloaded to your computer from the Arcam website.

The measurement takes multiple readings around the listening position, and that data is then fed back into the amplifier.

While you can go through this process yourself, we would recommend that you let your dealer manage that side of things; the Dirac parameters can be adjusted manually, and the dealer’s experience should mean they likely know best if any adjustments need to be made.

If you want a change from listening to disc-based formats, there’s also vTuner Internet Radio and Spotify Connect available.

It seems clear that the Arcam has designed the AVR390 to be simple and satisfying to use. The smooth buttons on its face and centred volume dial feel of greater quality than the Yamaha RX-A3060.

The universal remote control is also sleeker than Yamaha’s, featuring an eight-second backlight whenever a button is pressed and multiple Device Mode keys that changes the functionality of the remote based on its source, which is a nice touch.

The AVR390 has seven HDMI inputs, a USB port, wi-fi connectivity, and ethernet connection, alongside the expected digital inputs and FM/DAB radio antenna.

However the AVR390 doesn’t have any inputs on its front, which keeps it looking sleek, but makes it more difficult to plug in any extra video sources quickly.

If your neighbours are desperate to show you their holiday videos, you’re almost certainly going to be fiddling around trying to squeeze a HDMI cable into the back of the amp.

Putting on James Cameron’s Avatar, a great test of an amp’s ability to convey the realism of alien flora and fauna, the AVR390 manages marine Jake Sully’s exploration into the forest with relative ease.

In the fifth chapter, the Helicoradium spirale, a plant that looks similar to a biological series of interconnected horns, rapidly retracts into the earth; the AVR390 conveys the sound of each section of the plant clearly and with great definition.

Even when Sully sweeps his arm across the plants, and each one shrinks into the ground with an inrush of air and a sucking sound, there’s an enjoyably clear distinction between the start of the plants’ movements, and the end of them.

When the aggressive dinosaur-like Thanator attacks Sully, the noises as he dips and dives between roots and across the grasses remain crisp and detailed. As he leaps into the waterfall to escape the beast, the Arcam makes a good job of conveying Sully’s immersion in the water by surrounding you with the noise of bubbles rising and the wash of his powerful arm strokes.

The sound of the current moves smoothly from the front left of the sound field, behind your head, eventually coming back around as Sully breaks the surface of the water for air.

To its credit, the Arcam does deliver a very neat experience, but it isn’t as fun or expressive as the Yamaha, which recreates the underwater effect with more insight than the AVR390.

What the AVR390 lacks, and the Yamaha provides, is a greater scale and authority in its sound field and one that’s powerful enough to make you feel like you’re sitting on another world.

The planet feels just that bit smaller coming out of Arcam’s amp, and as such can’t quite capture the emotion of both the environment and the characters in the film.

While the Arcam does a good job in bringing Pandora to your living room, the Yamaha does a better job at transporting you to Pandora.

Changing to a more musical number, the documentary-film of Michael Jackson’s rehearsals and preparation’s for This Is It, the amp keeps the King of Pop’s bouncing beats and high vocals nicely organised.

It’s easy to follow the harmonies of any track, and even in the more complex numbers that have a huge range of instruments each one still remains clear, detailed and punchy.

By the standards of the Yamaha, the results lack a bit of scale, but it still remains an entertaining experience.

The AVR390 is an organised and undoubtedly clear amplifier that reveals a lot of the detail in whatever it’s playing. Only the fact that it’s up against some stiff competition prevents it from getting top marks.