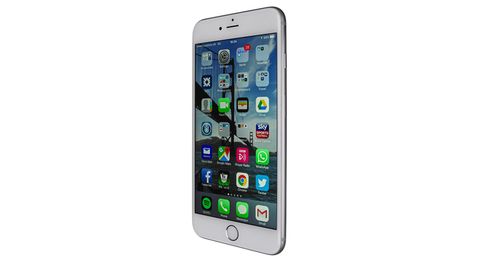 The best big screen iPhone yet

It would be easy to dismiss the Apple iPhone 6S Plus as just a bigger version of the Award-winning iPhone 6S. After all, the only major difference is screen size: the 6S Plus clocks in at 5.5in, while the smaller one is 4.7in.

But it’s not just a case of copying one iPhone on to a bigger template. The supersize 6S Plus is a confident performer, with design tweaks and features that make it a desirable phone it its own right.

We're not surprised to see that the iPhone 6S Plus is a beautifully built smartphone. The neatly curved edges, the smart metal body and slick finish all scream premium quality.

Everything is machined beautifully, from the sleek control buttons at the side to the speaker holes at the bottom.

Until the arrival of the Samsung Galaxy S6 Edge, no other smartphone has matched the iPhone for style and desirability.

There are tiny changes, though. The dimensions are 0.1mm thicker all around to accommodate the new 3D Touch screen layer, and it has a tougher 7000 series aluminium unibody to combat any more instances of Bendgate.

The more obvious difference is the weight. It’s only a 20g increase from the 6 Plus, but it does feel ever so slightly bulkier in hand. The smooth edges make the 6S Plus nice to hold, but the straight-backed design means it doesn’t fit that as snugly in the palm of your hand as the curved backs of the Moto X Style or Google Nexus 6P.

Those with smaller hands will find it a stretch to use with one hand.

You can get the iPhone 6S Plus in four shimmery finishes: space grey, silver, gold and a new rose gold colour.

The iPhone 6S Plus’s screen hasn’t changed either: it’s a 5.5in LCD display, with a 1920 x 1080 Full HD resolution. That may not look like much on paper next to the Quad HD displays of Samsung Edge+, LG G4 and Google Nexus 6P, but Apple’s Retina screens tend to hold their own.

Play the latest Doctor Who episode, and the 6S Plus delivers crisp detail, strong contrast and a confident colour palette. The Samsung Edge+’s AMOLED screen will give you deeper, lusher blacks and an appealing warm tone.

However, the 6S Plus reveals finer detail in dark shadows, and the clear brights punch and glow through the gloom. It’s a captivating picture.

What the iPhone 6S Plus gets right is the balance between a natural-looking picture and one that looks vibrant and exciting. The greater subtlety lends more depth to the picture, drawing you further in into what you’re watching.

While the 6S has much of the same picture quality, watching shows or films on the bigger 5.5in screen is that bit more immersive.

Whites in particular are stark – it’s most apparent when looking at web pages, where the crisp black text is punchy and clear to read.

Apple iPhones have long been one of the class-leaders for sound quality, and the 6S Plus has no desire to buck that trend. In fact, it’s pulled its socks up and improved upon the 6 Plus’s good – but not great – performance.

Timing has always been the iPhone’s strong suit, and the 6S Plus charges along with an assured and agile sense of rhythm.

Notes stop and start with precision, and there are stacks of detail surrounding each pluck of string or clunk of piano keys.

Tonally, it sounds nicely balanced. There’s a solid and weighty character running throughout the whole frequency range, which means you get a lovely rich and textured bassline, while the top end never sounds thin or bright.

Every song sounds taut and controlled, with instruments given plenty of space to breathe. Voices are pleasingly nuanced. Its performance is on par with the superb Award-winning iPhone 6S, if just a tiny bit more open and grander.

It’s a shame Apple still won’t support high-resolution music, as the iPhone 6S Plus would really do justice to better quality files. It’s a lively, insightful performance that outperforms hi-res rivals, such as the Samsung Galaxy S6 Edge+.

Moving on to everyday usability, the 6S Plus’s performance is fast and intuitive, thanks to the powerful 64-bit A9 chipset that works in conjunction with the M9 co-processor and 2G of RAM.

Every action is smoothly executed and becomes second nature in no time. Multi-tasking is a breeze, and swiping from one app or action to another is faultless.

As has become the norm, Apple’s policy of making small tweaks here and there to make the whole user experience more seamless continues in the 6S Plus. For instance, TouchID is faster, reading your fingerprint in the same instant as you press the home button.

It’s a small fix, but it makes a big impact in streamlining the iPhone experience. You can now also wake up Siri even when the screen is locked, with a casual “Hey Siri” command.

Plug your headphones in, and the last music app you were listening to (whether it’s Spotify, Apple Music or BBC Radio) will pop up in the bottom of the screen.

Siri’s integration runs deeper with iOS 9, too. It’s a more ‘proactive’ service, recognising your habits and recommending apps according to how often you use them and during which the time of the day. The same goes for your contacts. It’s Apple’s answer to Google Now cards, although not quite as thorough.

One standout feature is 3D Touch. The 6S Plus is equipped with a pressure-sensitive screen that unlocks the potential for a whole new dimension of interacting with your smartphone. Put simply, it’s right-click for smartphones.

Press down firmly on an app icon that supports 3D Touch, and a pop-up box will appear with shortcuts for the most used actions, such as taking a selfie, opening a tab in Safari, or composing a new message.

You’ll get a taptic feedback to let you know when you’ve applied the right pressure – you have to press down surprisingly hard – or when the app doesn’t support 3D Touch.

It works across most of Apple’s native apps, and many third-party apps (such as Facebook, Twitter, Instagram, Google Drive and Dropbox) have already rolled out updates to implement 3D Touch.

You also get “Peek” and “Pop” with 3D Touch. No, they’re not Apple’s new mascots, but rather the terms Apple gives to using 3D Touch within an app. This works best with emails, messages, notes and photos.

Apply the same pressure as before to get a quick preview (or “peek”) of a message’s contents, before pressing harder to “pop” into fullscreen mode. Again, it’s remarkably smooth and instinctive to use.

The 6S Plus’s camera has also been given a thorough update. The main camera has been bumped up to 12MP (from 8MP), while the front-facing FaceTime camera is now 5MP (instead of 1.2MP).

The numbers may not sound impressive compared with its rivals’ megapixels, but we’ve always been happy with the iPhone’s clear and detailed shots.

The boost in pixels on the 6S Plus means you get sharper images, better zooms and better detail. The strong contrast and colour balance is much like the iPhone’s picture performance: vibrant, subtle and true to life.

The camera app itself is excellent. Coupled with the iPhone’s skilful metering, taking pictures that are in focus and nicely exposed takes an instant. Optical image stabilisation minimises any hand-shaking effects in photos and videos.

You can shoot in Ultra HD 4K, HD and take cool-looking Slo-Mo videos. The built-in editing tools are slick and intuitive to use, too. A fun new addition is Live Photos, which turns your still snaps into gif-like animations.

When activated, it captures a three-second video when you press the shutter.

Apple users will be familiar with their iPhone not lasting a full day, but we wish the 2750mAh battery was bigger.

You get a decent eight and a half hours in constant use, and we usually didn’t need to charge it up until late evening, but the high demands of Apple’s Retina screen, 3D Touch and speedy performance rapidly eat through the battery life.

The battery saver mode helps conserve the last few percentages, but be prepared to keep the Lightning charging cable with you at all times.

Be warned: the Live Photos, the 4K videos, and the Apple Music downloads all take up considerable space on your iPhone. There’s no expandable storage, so think carefully before you choose between the 16, 64 and 128GB models.

Apple no longer offers a 32GB version, but the bigger sticking point here is price.

The starting price for the 16GB model is a cool £620. Compare that with Google Nexus 6P and Moto X Style offering 32GB for less than £500, while Samsung Edge+ falls in between the two extremes for its two models.

That price tag aside, the iPhone 6S Plus has impressed us. It’s a better smartphone by Apple’s own standards as well, with excellent sound quality finally getting the fifth star that eluded last year’s model.

It won’t be the device to win over non-Apple fans, though. That would be our Award-winning Samsung Galaxy S6 Edge+. Nevertheless, the 6S Plus is one we’d heartily recommend if you have deep pockets and want a bigger screen experience.

It’s a fantastic multimedia device, with the performance across picture and sound being one of the best we’ve seen in a smartphone this year.