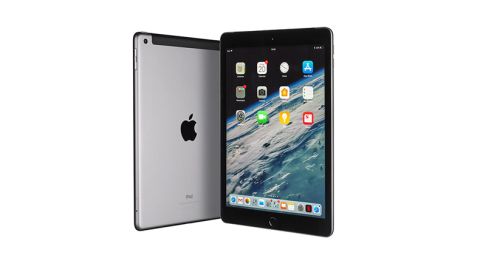 It’s not worth upgrading from last year’s model, but the new iPad is still the best tablet available at this sort of price

We assure you this is the new iPad. But as it looks identical to the ‘old’ iPad of 2017, you’ll just have to take our word for it.

There’s little difference when it comes to specification, too – the numbers tell us that not much has changed in the audio or video departments.

That’s mainly because Apple has decided to double-down on the marketing strategy that brought us the advert with a bespectacled girl asking ‘what’s a computer?’ by turning the standard iPad into a baby Pro.

Unlike its predecessor, the new iPad supports the Apple Pencil (an £89 optional extra). The processor has been boosted too, presumably so creative types can multi-task more efficiently.

So what’s in it for those who are media consumers rather than creators? Slightly improved performance at a slightly reduced price, that’s what.

If Apple is working on a bezel-less iPad-equivalent of the iPhone X, it’s presumably saving it as a future flagship model. At this end of the spectrum, it’s all about keeping costs low - and that means using the same chassis as last year’s model.

Dimensions, weight, the placement of the ports and buttons, the speakers, the camera – everything is the same. Sure, that makes the new iPad a little underwhelming, but it remains an exceptionally stylish device that’s both lightweight and reassuringly solid.

The eagle-eyed will notice there’s no Rose Gold option for the 2018 iPad, but that’s because the standard Gold option now has a hint of pink to it. Silver and Space Grey are both available as before.

We’ve learned to take tech specs with a pinch of salt - on paper, the new iPad’s screen is almost identical to that of last year’s. However, it isn’t actually identical.

The first sign that something is afoot is the presence of the Dolby Vision logo on some iTunes and Netflix content. True enough, this content is just that bit brighter, punchier and more colourful on the new iPad than it is on last year’s.

This isn’t the usual boost from standard dynamic range to HDR though, with the improvements being subtler in nature, but this is nevertheless slightly better performance with supported TV shows and movies.

The differences between the two tablets when fed SDR content are minor. The new iPad is a tiny bit brighter, but that’s pretty much the extent of it. And that’s fine, because the iPad was already a lovely device for consuming video content.

Colour balance remains the iPad’s strongest suit, balancing punch and realism in a way that means everything is vibrant but never unnatural.

From Looper to Thor: Ragnarok, Planet Earth II to Ghost in the Shell, it feels as though the picture you see is how it was intended, with excitement and subtlety as required.

This is a sharp and detailed picture, too, with the jungles of Planet Earth II being crisply defined and full of life.

Go for an iPad Pro 10.5 and you’ll enjoy a more vibrant, dynamic picture and better anti-reflectivity (not to mention a bigger screen), but you’ll have paid an extra £300 for the privilege. At this price the new, standard iPad is comfortably the best tablet for watching movies and TV shows.

It’s disappointing the four-speaker layout of the Pros still hasn’t made it down to this model, which means you only get stereo sound when holding the tablet in portrait. The audio from the drivers is at least crisp and clear, though predictably lacking in weight.

We’d recommend listening with headphones whenever possible because, if partnered with a good pair (there are none in the box), the new iPad sounds excellent. In fact, it sounds a touch better than last year, with an extra sliver of punch added to the already crisp, detailed and natural delivery.

Timing is good, and dynamic shifts, both subtle and bold, are handled well. It’s a natural, fairly neutral sound much like that of the company’s other phones and tablets, and one that lends itself well to movies and music alike.

Regular long-haulers should look at adding a pair of premium noise-cancellers such as the Bowers & Wilkins PXs, while those looking for something wired, portable and more affordable should check out the AKG Y50s.

Should you want to use your tablet for more than movies and music, the iPad has loads of options lurking in its App Store.

Mobile gaming has come a long way in the last few years, even offering premium, previously home console-only titles such as Fortnite, which looks great and plays astonishingly well on the new iPad.

Everything is held together by Apple’s iOS, now on its 11th edition. Most of iOS 11’s new features are geared towards productivity, making using one a slightly more Mac-like experience, but in general use the operating system is as clear and intuitive as ever.

The iPad still doesn’t feature an SD card slot, leaving you limited to the choice of 32GB or 128GB models. Prices have come down a little, specifically for the UK – the former by £20 and the latter by £10. The £319 we're quoting applies to the 32GB version we have on test here.

At the heart of the device is Apple’s A10 chip, which is more powerful than the A9 in last year’s model.

The difference is barely noticeable in day-to-day use, unless you’re a real power user - but it does give you a bit of headroom for the most intensive games and a greater degree of future-proofing. In the here-and-now, it’s just a super-snappy and slick user experience.

The added Pencil compatibility isn’t a huge benefit to anyone who uses an iPad for movies, music or games but, for a bit of annotating, writing or drawing it may well be worth the investment.

Doodling on the new iPad isn’t quite as natural as it is on an iPad Pro, on account of the layer of glass between nib and display (the Pro has single-piece, laminated surface), but it’s a pleasant, accurate experience in its own right.

But, in all likelihood, it’s not our opinion on the Pencil support you’re really after. You are probably interested to know what it’s like as a device for watching movies and TV shows and perhaps listening to a bit of music.

The answer is very good indeed and, in fact, just a touch better than last year - particularly if you fancy a bit of on-the-go HDR action. It’s only a subtle difference though, so if you already own the 2017 model we really can't recommend upgrading.

For everyone else, though, the 2018 iPad makes an excellent purchase. It’s comfortably the best tablet available at this sort of money.