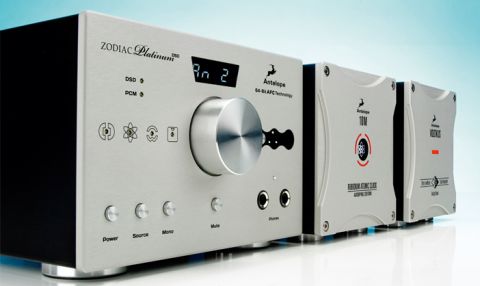 There’s much to like about this three-box DAC. The 10M clock is an expensive but worthwhile inclusion

How many boxes does it take to make the ultimate digital-to-analogue converter? If you ask Antelope Audio, three is the magic number.

The DAC and power supply can be bought for just under four grand. The 10M clock – available separately for an eye-watering £5570 – takes that to the package price we quote here.

Despite a significant discount on the total of the individual parts, that notable price tag puts the Antelope combination against some pretty big hitters from the likes of dCS, TAD, Esoteric and Chord.

Outboard clocks tend to be used in the professional world where multiple digital devices need to be synchronised to work optimally. In domestic applications they’re rare.

We’ve used outboard clocks only in dCS set-ups before, where they’ve proved beneficial. Digital reproduction relies heavily on the quality of the timing of the signals, so it’s clear that Antelope wants to reduce jitter (digital timing errors) to a minimum.

The 10M atomic clock’s accuracy is impressive at a claimed 0.03 parts per billion. Don’t worry, despite what the name might suggest it’s not radioactive. You won’t need to wear a protective suit every time you go near it.

The Zodiac Platinum DAC is just as interesting. This is a really well-equipped unit. It will accept 24-bit/384kHz music streams through its USB input and will happily handle DSD files too. DSD (single and double-speed) streams are upsampled to DSD256 in a bid to maximise performance.

The unit’s connectivity is excellent. There are pairs of optical and coax digital inputs, a USB and the less commonly seen AES/EBU.

Unlike most DACs, the Antelope also has analogue inputs, along with both balanced XLR and single-ended outputs. There are also de-jittered digital outs, in case you want to perform off-board digital processing of the signal.

We suspect this feature is more use in studios than in most homes.

The build of these three products is good. Only the DAC has front panel controls – they feel solid and precise in use. The casework is decently solid and nicely finished, but perhaps lacks the luxury feel that hefty package price suggests.

Still, the combination is small and easy to house.

Getting things up and running is simple. There are single leads connecting the power supply and atomic clock to the DAC. Get everything powered up and off you go.

Antelope makes a great deal of this DAC’s ability with DSD, so that’s where we start. Stevie Wonder’s Innervisions is as good a test as any, and through this number cruncher the presentation is solid, full-bodied and nicely refined. There’s a substantial kick to the hard-charging bass line in Higher Ground and a great deal of insight into the densely layered production.

Stevie’s vocals brim with their customary passion, and are rendered with finesse and power. This three-box combination delivers rhythms in a surefooted way, doing a good job of conveying the pace and drive of this track.

A switch to PCM music files sees this trio continue that good work. We give a CD-rip of Vivaldi’s Four Seasons a go and follow that up with a high-resolution files of Hans Zimmer’s The Dark Knight Rises – we’re impressed by what we hear. The Antelope has a cohesive and detailed presentation. It’s calm and composed, even when the music gets complicated, and delivers large dynamic swings with conviction.

The soundstage is fairly compact, but it’s precisely layered and stable. The DAC in our Naim NDS/555PS streamer certainly goes wider, having more of a sense of space, but the Zodiac still satisfies.

We have a bit of fun finding out whether the 10M clock makes a difference to the sound of the digital inputs – and it certainly does. Disconnecting the external clock doesn’t change the presentation much tonally, but in just about every other respect the performance takes a notably downturn.

There’s less confidence in the definition of notes, and rhythmic drive slackens. Subtle dynamic variations are less apparent, as are the differences in the sonic textures of instruments. Add these to a reduction of overall authority and scale and it’s easy to conclude that the outboard clock is worth having, despite its huge price tag.

Success is a little more qualified when it comes to the analogue inputs. Here the Platinum loses out on some of the transparency and insight so evident through the digital circuits. It’s still a pleasant listen, but we hoped for more.

Much the same could be said of the headphone output. It retains the character of the line output, but there’s a little less subtlety on offer.

Use the Antelope as a preamp – it has a variable output – and it turns out to be good. There’s not quite the solidity or dynamic punch of our reference Bryston BP26 preamp, but the shortfalls aren’t great.

Such an approach would certainly simplify the signal path and reduce system costs somewhat.

We like this three boxer. If you value the DSD ability, and can use its range of features, it’s well worth having a listen despite the formidable nature of some of the competition.

In the right circumstances it will make a fine choice.