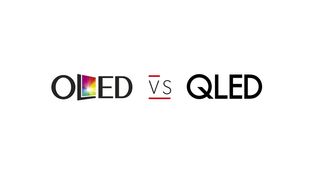 These are halcyon days for TV technology. Ultra HD 4K is now established, 8K TVs are becoming more common, HDR is readily available, and streaming puts a near-infinite supply of content at our fingerprints all day, every day.

But these are also confusing times for TV technology, with new acronyms and marketing terms popping up raining down like confetti at the wedding of the managing director of a confetti company.

One of the ongoing confusions lies in the comparison between the two technologies competing at the premium end of the TV market: OLED and QLED. So what exactly are they, what's the difference, and which is in pole position if you want the best possible picture? Allow us to fill you in.

OLED (Organic Light-Emitting Diode) is a type of display tech that consists of a carbon-based film through which two conductors pass a current, causing it to emit light.

Crucially, this light can be emitted on a pixel-by-pixel basis, so a bright white or coloured pixel can appear next to one that’s totally black or an entirely different colour, with neither impacting the other.

This is in direct contrast to a traditional LCD TV, which relies on a separate backlight to generate light that’s then passed through a layer of pixels.

Despite many attempts over the years, no TV with a backlight has ever managed to completely eradicate the issue of light bleeding from an intentionally bright pixel to those around it.

Other advantages of OLED are that the panels are lighter and thinner than a typical LCD/LED arrangement, viewing angles tend to be significantly wider, and response times can be supremely quick.

One disadvantage is that OLEDs are comparatively expensive to produce. Prices are steadily getting more realistic – thanks in no small part to LG (currently the only producer of OLED panels for TVs) selling panels to other manufacturers such as Sony, Panasonic and Philips, increasing both the amount being produced and competition in the shops – but OLED TVs still tend to be a fair bit more expensive than standard LCD models. That said, Samsung's QLEDs tend to be closer to OLEDs on price than to LCDs.

Sizes can be an issue where OLEDs are concerned, too. Until very recently, you couldn't buy an OLED TV smaller than 55in. While there is now a 48in OLED panel around, which LG has debuted in its OLED48CX, you're not exactly spoiled for choice if you don't want a big TV.

OLEDs also struggle to reach the same peak brightness levels of even an average backlit model, although the deeper blacks do go at least some way towards compensating for that.

Finally, the organic nature of an OLED panel means it's potentially susceptible to image retention and even burn-in, in a similar way to the plasma TVs of old. This really doesn't seem to be a widespread problem, though. We've never had image retention problems with any of the OLEDs that we've tested (or the models that staff members have bought for use at home) and manufacturers do build in features to reduce the risk.

That said, those manufacturers do still feel the need to warn customers about the potential for image retention either in the TV's manual or as a pop-up message on first installation, so make of that what you will.

The one major TV manufacturer not aboard the OLED train is Samsung, which is instead promoting a rival technology called QLED.

QLED stands for Quantum-dot Light-Emitting Diode which, in theory at least, has a great deal in common with OLED, most notably that each pixel can emit its own light, in this case thanks to quantum dots - tiny semiconductor particles only a few nanometres in size.

These quantum dots are (again, in theory) capable of giving off incredibly bright, vibrant and diverse colours – even more so than OLED.

The problem is that the quantum dots in current QLED TVs do not in fact emit their own light. Instead they simply have the light from a backlight passed through them, in just the same way that an LCD layer does on standard LCD/LED TV.

Quantum dots still improve colour vibrancy and control over LCD, but this isn’t really the next-gen, game-changing technology that Samsung has always suggested with its QLED branding.

OLED’s ability to light each pixel individually gives it an undeniable advantage over QLED. While overall brightness levels are lower, contrast is still incredibly impressive.

But things get really exciting when we look forward to next-gen quantum dots, which will be capable of emitting their own light. These photoluminescent quantum dots will give the TV the ability to light up and turn off individual pixels, just like an OLED set, while theoretically retaining the advantages of greater vibrancy and brightness.

Unfortunately, it looks as though TVs that utilise these new quantum dots are still  a long way off. Samsung's focus of late has been on 8K QLEDs and another TV tech of the future, called MicroLED.

Samsung's 2020 TV line-up includes some models that use direct LED backlighting and others that use edge-lighting. The company is also this year releasing MicroLED TVs at consumer-friendly sizes, although it will be a while yet before they hit consumer-friendly prices.

In the here and now, Samsung's incremental changes to its QLEDs have been very successful. Last year's Q90R introduced the deepest blacks and widest viewing angles ever seen from a backlit TV, while maintaining the brightness and colour vibrancy we've come to expect from QLED.

The company has made some odd decisions with its 2020 line-up, with last year's 4K flagship (the Q90R) being replaced by an 8K model (the Q800T), while the new flagship 4K sets (the Q95T and Q90T) being downgraded in terms of backlight dimming zones. But while that's more than a little confusing, the performances of the models we've so far tested have in fact been excellent, particularly in terms of colours and motion handling.

Arguably, the perfect TV technology would combine the brightness and vibrancy of current QLEDs with the black performance and uncompromised contrast of OLED, and current thinking is that the next-generation, self-emissive quantum dots could offer just that – to the extent that many manufacturers, including LG, are apparently working with that in mind. MicroLED will likely bridge the gap between the OLEDs and QLEDs of now and the light-emitting QLEDs of the future.

It's going to be a while before MicroLED is a realistic proposition for most people, and self-emissive quantum dots are even further away, so for now a TV buyer is forced to choose which combination of strengths and compromises best suits their taste.

Samsung's QLEDs absolutely deliver a brighter and punchier picture than their QLED rivals, and in recent years have impressively closed the gap in terms of black depth and viewing angles.

OLED still has a slight advantage in these regards, though, and while OLED TVs don't go as bright as QLEDs, their self-emissive properties make for absolutely stunning contrast. What's more, the thinness of the panels has allowed for some lovely TV designs, such as the new, 2cm-thick GX.

One thing to bear in mind is that the panel technology used is only one part of the picture puzzle, with a set's processing making a big difference to performance. That's why OLEDs from LG, Philips, Panasonic and Sony all look different in action. Some are punchier, others sharper; some offer richer colours while others are better at handling motion. In other words, you can't simply go out and buy the first OLED you see. You should instead consult our guide to the best OLEDs you can currently buy.

While practically all QLEDs are sold by Samsung, they differ from model to model, too; not so much in terms of processing (all 2020 QLEDs have either the Quantum Processor 2.0 4K or Quantum Processor 2.0 8K, depending on the resolution of the set), but in terms of key specs such as the brightness and number of dimming zones of the backlight. This year, Samsung's top tech is reserved for its 8K models, but its top 4K model, the Q95T, is more impressive in action than the slightly downgraded specs might suggest.

The long and short of it is that OLED and QLED are both capable of exceptional results, and you're probably best off not setting your sights on a specific technology and instead simply looking for the best TV you can afford. Our guide to the best TVs you can currently buy should help in that regard.