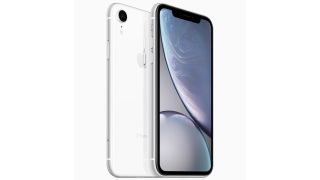 Shopping for the very best smartphones can be an expensive business. These days, it's not unusual for Apple and Samsung to charge north of £1000 for their top-notch, full-fat flagship devices.

However, as the range-topping models got better and better, so have the their cut-price cousins. Both Apple and Samsung offer more affordable 'diet' flagship phones – boasting premium features at a far more attractive price.

In Apple's case, the iPhone XR hits this sweet spot. It's not as big or powerful as the iPhone 11 Pro, but delivers a near-identical experience at a cheaper price.

Samsung offers a similar budget flagship – the Galaxy S10, which sits just below the larger Galaxy S10+. It might be smaller and cheaper, but this feature-packed phone offers smart design, fast interface and an impressive array of cameras.

The iPhone XR has a 6.1in LCD display – the largest LCD ever fitted to an iPhone – but its resolution is significantly lower than the Samsung's Galaxy's AMOLED screen.

One the upside, the iPhone XR's Liquid Retina HD Display features Apple’s True Tone tech, which uses a light sensor to adjust the white balance to match the colour temperature around you. This makes it easier on your eyes – especially in darker environments.

The Samsung Galaxy S10's 6.1in AMOLED panel offers a higher resolution (1440 x 3040 pixels vs the iPhone XR's 1,792×828 pixels). And, being an AMOLED, boasts better contrast, viewing angles and colour reproduction.

The S10 is also one of the first phones to feature HDR10+-certified screens for ultimate 4K HDR picture performance. How much difference that makes on a 6.1in screen is debatable, but there's no doubt that the S10's screen looks gloriously vivid..

Both devices are hewn from an attractive mix of glass and aluminium and deliver headline-grabbing features. There are some key differences to watch out for, though.

The iPhone XR does away with the fingerprint sensor and relies solely on Face ID, which maps your facial features in about half a second. Samsung's Galaxy S10 offers the best of both worlds. It features an in-display ‘Ultrasonic Fingerprint’ sensor as well as face unlocking tech.

Both phones are water-resistant, but the S10 has a slight advantage: it comes with a higher IP68 rating compared to the iPhone XR’s IP67. That said, neither come with a warranty that covers water damage.

Design-wise, the iPhone XR has a chunkier bezel framing its display. And it's safe to say that large notch around the front-facing camera isn't everyone's cup of tea. The Galaxy S10 looks much sleeker, sporting minimal bezels and a small camera hole set into the edge-to-edge display.

When it comes to user interfaces, both Apple iOS 13 and Samsung One UI are intuitive to use and offer plenty of streaming apps and connectivity options.

Samsung's One UI is much improved (though there's still some bloatware) and can be customised to your heart's content. Apple's iOS 13 features faster Face ID unlocking, Dark Mode and a new Photos app.

Voice assistants are present in both phones, too. Samsung's Bixby is entertaining and useful at times, but Apple's Siri is far more detail-orientated. That said, neither are a patch on Google Assistant or Amazon Alexa.

Under the hood of the iPhone XR, you'll find the same (Apple designed) A12 Bionic chip used by it's pricier siblings, the iPhone XS and iPhone XS Max. It makes short work of skipping through iOS. Scrolling and navigating between menus is seamless, with apps speedy to open and respond to swipes.

Thanks to Qualcomm’s latest Snapdragon 855 processor chip, Samsung's Galaxy S10 is also lightning-quick, with no lag when flicking between apps or when moving around the screen. Swipe movements are instinctive, with only the occasional wobble.

That said, there's no doubt that Apple's A12 Bionic chip has a slight edge when it comes to raw power – meaning the XR has more appeal for gamers.

This isn't really a fair fight. The iPhone XR has one 12MP wide-angle lens on the rear, while the Galaxy S10 sports no less than three rear cameras.

Still, the iPhone XR's solitary rear lens offers 5x digital zoom, Portrait mode, TrueTone flash and use of Apple’s Smart HDR feature. Pictures look clear and sharp with balanced colours and good levels of detail. If you're looking for a capable point-and-shoot snapper, the XR does the job.

There's an impressive range of camera modes too, including Panorama, Pro and Live Focus. Artificial Intelligence means you can opt for the 'intelligent camera' scene optimiser or ask for shot suggestions.

Both devices feature a single front facing camera. But the S10 tops the XR's 7MP TrueDepth camera with a 10MP selfie shooter that captures 4K video.

More is more when it comes to smartphone camera tech, so the versatile S10 is the clear winner here.

While the iPhone XR features an 2,942mAh battery, the Galaxy S10 is armed with a larger 3,400mAh battery. Case closed? Not quite. The iPhone XR's LCD display is much less power-hungry than the S10's AMOLED, which evens things up.

What's more, both devices feature chipsets designed to prolong battery life. Both support wireless charging and fast charging, too, so they're easy to juice up.

Samsung's Galaxy S10 also supports Wireless PowerShare, which allows you to share your phone's battery with any compatible wireless charging device (including iPhones), simply by placing the two devices close together. A neat trick.

There's no headphone jack on the iPhone XR, so your options are limited to the supplied Lightning Earpods (distinctly average) or a pair of suitable wireless headphones (the iPhone supports the Bluetooth 5.0 standard).

If you don't want to be jack-less, go for the Galaxy S10. It has a 3.5mm headphone jack, so you can use existing wired headphones without an adapter. It also provides the option to charge and listen at the same time.

To Apple's credit, the iPhone XR's built-in speakers produce ‘wider stereo sound’ and offer decent sound. For the odd blast in the comfort of your own home, the XR is perfectly palatable.

Samsung's Galaxy S10 handset has AKG-tuned speakers that go loud but sound distinctly lightweight. There's support for Dolby Atmos, though we’re not convinced a smartphone is really the right device to be talking about Atmos.

Ultimately, like most phones we’ve tested, both the S10 and XR only really come into their own when listening with a decent pair of headphones.

Samsung's Galaxy S10 costs more than Apple's iPhone XR, but comes with better camera trickery, an ultra-wide lens, ingenious power-sharing tech, and a beautifully-sharp AMOLED display to level-up video quality. It's not perfect, but this feature-packed flagship is outstanding value for money.

If that extra cost is a deal breaker, or you're heavily invested in the Apple eco-system, the iPhone XR is the smarter choice. Provided you can live with the lower screen resolution and won't miss the 3.5mm headphone jack, the iPhone XR stacks up well against the pricier XS and XS Max. A great choice for those who want a bite of the Apple for a relatively affordable price.