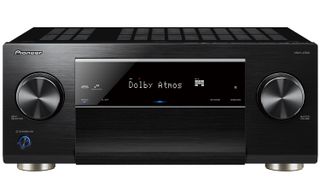 The AV receiver is the powerhouse of the home cinema experience. It binds together the sources, the speakers and what you see on screen. It brings cinema magic into your home, cocooning you in a soundscape of humour, drama, crashes, bangs and wallops.

But AV receivers are imposing machines. If you’re an AV newbie, it can be daunting to know where to start when you’re confronted with a big metal box covered in a multitude of connections, sockets and acronyms.

So, whether you have an amp ready to set up or you're looking to acquire one, we’re here to guide you through all that intricacy.

We’ll give you tips on what to consider when choosing the right AV receiver for you, what to look out for with the connections, talk you through the auto-calibration process and give you even more tips on how to get the very best performance out of your new home cinema amplifier. You’ll be a pro in no time.

Choosing and buying your AV receiver

AV receivers may look complicated, but it can be easier to pin down requirements for buying your new amp than most other hi-f or AV kit. They all look the same, after all – a sturdy rectangular box – so at least you don’t have to make many aesthetic choices beyond perhaps black or silver.

You mainly need three things on your checklist: how many speakers do you have, how many HDMI inputs will you need, and what’s your budget?

Since you’ve (presumably) already made the big decision of having a surround sound system in your home, you probably already know how many speakers you can fit in – from a basic 5.1 to an all-out Dolby Atmos extravaganza. So your amp requirements will largely be dictated by this.

If you’re only ever going to have room/space for five speakers and a subwoofer (the minimum for a proper surround system), then you don’t have to look further than a five-channel AV receiver. If, however, you’re toying with the idea of expanding – adding some extra height channels, say, or maybe you want an Atmos system at some point – it’s worth investing in a nine or 11-channel amplifier so you’re future-proofed.

Thinking about installing an Atmos system from the start? Firstly, we envy you, and hope you have permission from your neighbours above. Secondly, we’d double-check your AV amp supports Atmos soundtracks – most amps at £500 and above should do as standard by now.

That does means you’ll be looking at amplifiers in the £2000 region – but it’ll be worth it. Why? We don’t find two Atmos speakers enough for a genuine Atmos effect, so if you’re serious about getting immersive, overhead, 3D sound: go for four.

Next to consider is connections. You’ll want to make sure you have enough HDMI inputs if you’ve got multiple sources – Blu-ray player, console, set-top box – and that they support the latest 4K and HDR specifications (HDCP2.2) if your film collection is increasingly full of 4K HDR Blu-ray discs.

Most amps will come with some legacy analogue connections, too, if you’ve got kit that pre-dates HDMI, like a VHS player.

Price is obviously a big factor, too. You can only buy what your budget dictates, after all, and that does simplify matters somewhat.

As a general rule of thumb: if the amp is around £250 and below, you’ll get basic 5.1, a handful of HDMI inputs, and no internet.

Move up to the sweet spot of £500 and you get every single cutting-edge AV feature – wi-fi, Dolby Atmos, DTS:X, 4K HDR passthrough, multiple HDMI inputs, all music streaming features – thrown in.

A grand and more: everything above, but more power, bigger scale of sound, more speaker terminals, more fine-tuned audio calibrations and more features.

What about everything else? Features such as wi-fi, Bluetooth, Spotify Connect, Tidal, SACD playback, AM/FM tuners, hi-res music streaming and multi-room are all up to personal preference (although most amplifiers bar the most budget ones come loaded with all these features anyway), so cast an eye over the amp’s specs sheet to make sure it has everything you want.

You’ve bought your amp, congratulations! Now it’s time to plug everything in.

The sheer number of connections on the back of any amp can be daunting, but take your time to get it all set up properly in one go and you’ll never have to do it again.

We’d recommend keeping the amp powered off when you’re plugging in your speakers, subwoofer and sources. That will stop any pops, shorting of circuits or any other possible damage to your system.

Most if not all amps have everything clearly labelled. Some, such as Denon’s amps, helpfully colour code the speaker terminals to make plugging in five (or more) pairs of speakers easier. Surround backs, height or front width speaker terminals can double up as those for Dolby Atmos speakers, too: these might be labelled as “assignable”, “5.1.2ch” or “Extra SP”.

If you’ll be playing 4K HDR content, look out for the “HDCP2.2” label above the HDMI inputs. In some cases, only a couple of HDMI inputs will be HDCP2.2 certified – make sure you plug your 4K Blu-ray player into these.

You’ll also notice that each HDMI input has a source assigned to it: Blu-ray, DVD, CD, Game, CBL/SAT, media player and so on. This isn’t just friendly guidance. This means the manufacturer has taken care to optimise these inputs for those particular sources. The Blu-ray input, for example, might offer the shortest signal path to the processor and so delivers the best performance.

For instance, the Award-winning Sony STR-DN1080 has two of its HDMI inputs (titled BD/DVD and CD/SACD) optimised for the best audio quality, and recommends plugging your favourite sources into these two.

Two more connections worth talking about: we’d recommend using the wired ethernet connection if you can, as it’s more stable and reliable than wi-fi.

And the USB port in front? It’ll play media files off a USB stick, but we find it useful for charging our smartphones (if the amp allows it).

Here comes the lengthiest, fiddliest part of setting up your AV receiver.

Most AV receivers come with a set-up mic. Plug that in and run the auto-calibration when prompted – it will measure your speakers and your room, set the speakers’ distances and levels and, in the case of fancier (read: pricier) amplifiers’ calibration systems, optimise the amp’s performance to match its surroundings.

We’d recommend running the auto-calibration right after plugging everything in – get that fuss out of way in the very beginning, the sooner you can start listening to your new home cinema.

Also, the system won’t sound right until the calibration is done. Once the mic is plugged in, simply follow the on-screen instructions to the letter and let the calibration run its course. Some take only a handful of seconds, while others can take more than five minutes because they take multiple measurements. We tend to go off and make a cup of tea for the longer ones.​

If you have Dolby Atmos speakers installed, you need to tell the amp so before calibrating.

Head into the manual speaker settings (you may have to delve into subfolders in the menu) to tell the amp if they’re upward-firing Atmos-enabled speakers (such as the KEF R50s) or installed in the ceiling – then it can calibrate accordingly. The amp will ask for your room’s ceiling height, so keep a tape measure handy.

You’ll also need to tell the amp if you’re using one or two subwoofers. Set the subwoofer volume about halfway, run the calibration and then adjust accordingly if it sounds too bassy (or not bassy enough) when playing a film clip.

If the calibration flags up a fault with one of the speakers during measurement (or doesn’t recognise it when it’s there), double-check it’s plugged into the right terminal – sometimes it flags up when a speaker is out of phase.

Most calibration systems these days are largely accurate, but it’s always worth delving into the manual speaker settings to double-check the distances and levels, and tweak the results where needed. Trust your ears: if it sounds wrong, it probably is, so adjust away.

The main thing you’ll need to change is when the amplifier hasn’t recognised whether your speakers are large or small (this happens a lot).

You can even get nerdy like us and adjust the speaker levels using a sound pressure meter level (or use the equivalent smartphone app – they genuinely work).

It’s worth noting if you ever change your speaker package, change its position or move furniture around in the room, you’ll need to run the whole calibration again. So don’t lose that set-up mic.

Just as you’re coasting the post-calibration high and are ready to hit play on your 4K Blu-ray, you might notice another couple of options: surround sound modes and DSPs.

DSP (digital sound processing) can vary from Dolby or DTS processing modes to specific Drama/Sci-Fi/Adventure/Games modes that boost certain aspects of the sound. You may even enjoy more fanciful effects that simulate the acoustics of a cathedral, a concert hall, an NYC jazz club or LA’s Roxy Theatre.

The latter can be enormous fun to play around with, and Yamaha has some of the best sound programs for invoking a specific environment and delivering a subtle yet convincing effect.

But since we prefer not to colour the sound signal too much (if at all), we’re going to focus on just a handful of sound modes that put sound quality at the fore. Look out for the ‘straight’, ‘direct’ or ‘pure direct’ modes on your amplifier – these tend to offer the purest signal from source to output.

The modes vary with each manufacturer, but they generally switch off any part of the circuitry that isn’t needed, thereby reducing distortion and getting rid of any interferences – all in the name of keeping the signal path as pure as possible.

On the other hand, you might find you need a specific mode to play Dolby Atmos or DTS:X soundtracks (which are layered on top of the standard 5.1 or 7.1 soundtrack on Blu-ray discs). The Sony STR-DN1080 needs to be on A.F.D. (Auto Format Decoding) mode, for example, to play Atmos or DTS:X – it’ll say on the amp’s display when it’s decoding an Atmos soundtrack (if it’s not, it’s definitely not playing in Atmos).

One more thing: if you’ll be watching/listening to a variety of content – films, sports, video games, stereo music – through your amp, it’s worth setting up shortcuts with bespoke settings for each type of content you watch. A particular movie mode for films, two-channel stereo mode for music only, another DSP for games – it’ll save you from having to change the sound settings all the time.

When we test an AV receiver, we let it ‘run in’ (i.e. keep it playing for a day or two) to get it sounding its best before any critical listening. Since you’ll be living with your amp, you’ll find that it sounds better the more you use it.

So what are you waiting for? Pop in your favourite film, grab some snacks, and enjoy your new, perfectly set up home cinema system.

Before we go, here are some general AV tips: