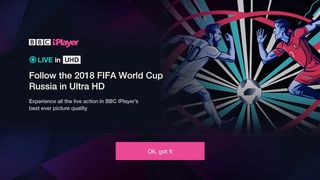 4K TV is here and the BBC is, finally, on board. The first BBC 4K broadcasts have taken place, with the corporation using the iPlayer service to stream 4K TV shows and live 4K sport, all for free to license holders.

The amount of 4K iPlayer content does remain limited, however, with new shows and broadcasts launching on an ad hoc basic – and for limited numbers of people.

So how can you watch 4K BBC content? What can you actually watch? And what are the future plans for 4K Ultra HD on the iPlayer? We've been keeping tabs on all the 4K BBC developments, and spoken to the BBC's R&D team, so read on for all the latest details.

Back in 2016, the BBC dipped its toe into the crystal clear 4K waters, streaming Planet Earth II in 4K on iPlayer. This was a very brief 4K trial, with just four minutes of content. It was shown in 4K resolution and in high dynamic range (HDR) quality, and was limited to a small selection of Panasonic TVs who could access the 4K test through their iPlayer app. Other TVs and devices simply couldn't access the test.

This was followed by a 4K trial of Blue Planet II in 2017, again accessed via iPlayer. This was a much more comprehensive test of the BBC's 4K streaming abilities, with the full series available in 4K and HDR for 30 days immediately after the broadcast of the final episode.

Following these trials, the BBC has live streamed the 2019 FA Cup Final, a rugby fixture, the 2018 Wimbledon tennis championships and the FIFA 2018 World Cup on its iPlayer platform. The BBC also worked with Sky in the broadcasting of the 2018 Royal Wedding in 4K.

It's clear, and the BBC has said as much, that the home of 4K BBC content will be on iPlayer. But you'll need the right kit to watch...

The BBC has being doing its level best to increase the number of supported TVs, streamers and other devices with every new trial. TV brands that support 4K on iPlayer now include Hisense, LG, Panasonic, Philips, Samsung and Sony, while you can also watch on the Amazon Fire TV 4K Stick, the Roku Streaming Stick+ and the Virgin TV V6 box. Head over to the BBC website for the latest list of 4K iPlayer compatible devices.

Phil Layton, head of broadcast and connected systems in BBC’s R&D, told What Hi-Fi?: “iPlayer needed very little modification to do UHD. All iPlayer does is play back the video object it’s given to play. The television is responsible for the decoding, for receiving the segments, and for picking the right ones according to the bitrate for the network. In terms of televisions, we don’t have anything specific in iPlayer, it simply relies on HbbTV and DVB underlying standards… those standards include DVB-DASH, it’s nothing BBC-specific. If a TV supports those, it works."

What internet speed do you need for 4K iPlayer?

The BBC recommends an internet connection with a minimum speed of 40Mbps for the full-fat 4K experience of 3840 pixels at 50 frames per second. That's fairly hefty and while you may well be able to view the 4K stream with a slower connection, it may buffer or, more likely, you will simply be fed a lower quality picture if the BBC's servers detect your connection isn't up to scratch.

For recent trials, the BBC was running an adaptive bitrate streaming system, with 2560, 1080 or 720 resolutions also available for those with slower speeds. A wired connection rather than wireless will likely help ensure you get the best possible picture performance.

What can you watch on 4K iPlayer?

Now that's a good question. At this precise moment - nothing. The BBC's 4K service is still very much a trial, which means 4K content comes and goes as the BBC decides to broadcast TV series and live sporting events. And the corporation doesn't tend to give too much warning ahead of events.

From rugby matches to the FA Cup final, Blue Planet to Planet Earth, it's very much a case of watch this space where 4K BBC broadcasts are concerned. With Wimbledon around the corner, we'd be very surprised not to see 4K streams emanating from the All England Club this July. And with big sports tournaments - Euro 2020 and the Summer Olympics - in the calendar for 2020, we hope that the BBC continues to ramp up its coverage.

What about the 4K iPlayer picture performance?

The response to the BBC's 4K streams has largely been positive, after some initial teething problems. We were certainly impressed with its obvious superiority over the HD broadcast.

Layton told us most people have been getting the highest quality 4K picture: “Only about 10% [of streamers] were on the two lower presentations, so the rest were getting 3840 or 2560.”

Also important is latency, and how the stream deals with delays and buffering. “[Streaming latency] is a recognised industry-wide problem," says Layton, "and we need to look at a solution for getting streaming as low-latency as broadcast. We want streaming to be as good as broadcast. We’re working on it... We made some small changes in the second week of the World Cup and took 20 seconds out of the chain, so we got down to about 45 seconds at one point."

As stated on a BBC blog post, the BBC is hopeful, "higher compression efficiency can be achieved and will likely be available as part of a future video-coding standard in the longer term". The BBC is also looking to streamline the entire delivery process, moving to a "full HDR workflow" and reducing the amount of processing in the chain.

The BBC also revealed it will run some High Frame Rate trials, at 120 frames per second (Wimbledon streams were 50fps).

What about sound quality?

And then there's the other half of the TV-watching side to consider. “We have to look at sound. We ran out of time here. Most of the issues we found were not at our end, they were with the receivers. We didn’t have time to work through with receiver manufacturers. We’d like to be offering 5.1, we’d like to be thinking about next-gen audio. Using some complex functionality in people’s televisions, which is part of delivering the service,” says Layton.

Perhaps we’ll see these wishes first fulfilled with on-demand content. “We probably have to go back and look to do on-demand again. Blue Planet II was encoded by my team, but it’s not right to have an R&D team keep running the encoding process, we have to give the BBC [production teams] more of that capability.”

One day, 4K HDR broadcasts might be routinely delivered over 5G, and we'll all remember the journey it took to get there...

HLG: everything you need to know