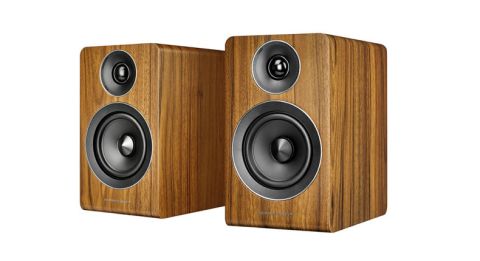 If the aesthetics of a speaker reflected its sonic character, these Acoustic Energy AE100s would be bright and colourful things. You might even need to don a pair of sunglasses before reading this review.

Which is another way of saying that these budget speakers are charismatic, fun-loving performers.

So there’s little correlation between appearance and sound here. The AE100s could hardly look any more unassuming, with their typical walnut- or black-finished boxes, two-way driver arrangement and discreet display of the brand badge.

They’re smart in a classic way, like many Acoustic Energy speakers before them, and the company claims they have a higher standard of finish than any of its previous entry-level speakers.

So if you’re looking for a competent, budget-orientated pair of compact speakers, have you found them here?

The AE100s have been designed to achieve high sound-pressure levels from a small enclosure. The AE engineering team claims to have achieved this, thanks chiefly to three key technologies: a 10cm mid-bass driver built around a long-throw motor system, a rear slot port for enhancing bass and a 28mm soft dome tweeter featuring the company’s Wide Dispersion Technology.

Designed to improve dispersion, this last has already proven its worth as part of the five-star AE1 Active’s make-up.

We place them in their preferred spot, near a rear wall - though not right up against it. The AE100s rely on a wall to bolster the solidity and fullness of their sound, utilising their rear-ported design.

We begin with Public Service Broadcasting’s Gagarin, and the AE100s put their best foot forward.

They eagerly lay their sprightly nature bare in jazzy celebration of the world's first cosmonaut (the track’s theme), driving the playful bassline and multiple riffs with enthusiasm and keen-eyed focus.

That readiness resurfaces as we roll into Ray Wylie Hubbard’s Dust of the Chase – as does the speakers’ stand-out talent: their midrange. The opening acoustic plucks brim with texture, the Acoustic Energies taking in each strum of a string.

The country legend’s distinctly guttural vocal is projected with stark clarity and fullness, and delivered with his signature twang and rough, raspy elocution. That midrange insight captures the sense of musing in the song’s poignant vocals.

Despite their bold, if a little forward, presentation, the AE100s' character is capable of being cautionary as well as carefree. There’s deliberation to the timing during the rich interplay between the droning electrics, shakers and harmonica, and it convinces as a result.

In terms of balance, the bassier notes rear their head just as much as the frequencies above them.

Their execution isn’t quite as accomplised as the Award-winning Dali Spektor 2s, which are a little tighter in terms of their timing.

The first drumbeats flow across the soundstage with greater conviction and precision via the Dalis, revealing greater subtlety and dynamic variation.

The Acoustic Energies don’t have the same expansiveness of soundstage as the Dalis or the Q Acoustics 3020is, nor do they describe as much space between instruments as their rivals.

While the AE100s could do with a subtler touch, their insight isn’t in question.

We fire up Perfume Genius’ Run Me Through, one of the more haunting on the singer’s latest art-pop album, and the sobering moodiness of Hadreas’ softly spoken lyrics and the breathy woodwind accompanying it sound suitably unsettling through the AEs.

Their absorbing qualities particularly hit home here, as do those of the five-star Dalis and Q Acoustics.

But despite an abundance of competition around the £200 mark, the can AE100s hold their own. They may not be the most refined or transparent performers out there, but they do promise a good time.

Plugged into equally entertaining kit, like the Onkyo A-9010 stereo amplifier or Denon D-M41DAB microsystem, they will sing along as comfortably to your ‘80s disco as they will your classical compilations.

The performance of the AE100s has left us looking forward to seeing what the brand has to offer with the next range up from this, the 300 Series.

See all our Acoustic Energy reviews