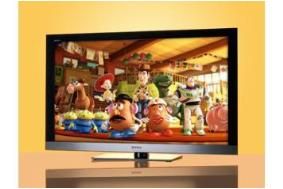 All the big manufacturers are getting aggressive on value this year. Sony's new Essential Range (EX) is its budget offering – and this set costs just £1200 even before the discount-happy online retailers have started listing it.

Cheapness isn't quite the same as value, but Sony has seen fit to jam plenty of features into the 'EX503 to ensure the tag applies.

So, here you get a Freeview HD tuner, the highly regarded Bravia Engine 3 with 100Hz motion processing, the full XrossMediaBar menu system, USB and DLNA media streaming, and internet connectivity.

Astonishing ability for the money
All very impressive. But what makes this set great value is its performance, which is downright exceptional for the money. Select the First Flight scene on the Avatar Blu-ray, and the Sony rewards you with a breathtaking image.

Detail and definition is a significant step up over its closest rivals. There are freckles and scars in the faces of the Na'vi that many TVs miss, but the Sony adds that extra degree of life and realism to the computer-generated characters.

The craggy rocks and patches of grass of the floating islands are equally well-defined, and this all adds up to a picture with markedly greater depth and three-dimensionality. It might not be ‘proper' 3D, but it's still spectacular.

A thorough test of motion
This scene is an equally thorough test of motion, and while some rivals are now able to produce slow pans with Sony-like grip, the initial, panicked scrambling and flapping of Jake's Ikram proves that the 'EX503 still offers the most accomplished delivery of the more fast-paced, unpredictable movement.

There's also excellent neutrality to the colour palette, which results in thrilling vibrancy during the Avatar Blu-ray, but accurate paleness when you switch to The Machinist on DVD.

The standard-definition picture is detailed and clean, and ably combines black depth with white punch and insight. Switch to the digital tuner and BBC HD is crisp and vibrant, as expected, but standard-def is also clean and detailed.

In fact, the Sony strikes just one bum note, and it's with sound. We don't expect amazing quality from flatscreen speakers, but this is more lightweight than many rivals.

If you can live with that, this Sony is a brilliant bargain buy.