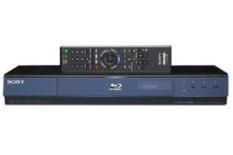 We know that a lot of important and interesting stuff has gone down since December last year, but consider this: the Sony BDP-S550 is an old hand at reviews, having been tested in that issue, and back then it cost £350.

Barely half a year on, it's more than £100 cheaper than that, and there's no sign of it being replaced soon. That's by no means a bad thing.

The BDP-S550 is as sturdy and attractive a machine as we've come to expect from Sony, and it's got most of the specification highlights (particularly Ethernet connectivity for access to BD Live content) its rivals are packing.

Sure, it does without a USB input but (for our money, at least) more than makes up for that with its Xross Media Bar menus for slick set-up, and logical, backlit remote control.

Perhaps most pertinently, the S550 has eight-channel analogue outputs so owners of pre-HDMI receivers can enjoy high-def audio decoded by the player. Few rivals offer the same benefit.

Good performance across the board
Dealing with the Blu-ray of Seven Pounds, the Sony does a good job pretty much across the board. Colours and contrasts are clean and punchy, offering a vitality to images that's a match for its rivals.

Motion of all severities is handled with something approaching nonchalance, and the S550 dishes the details of pictures as readily as an over-the-back-fence gossip.

The only criticism we can raise is that there is the merest hint of uncertainty when it comes to edge definition, at least relative to the best rivals. It is only that, though, that spoils the Sony's full house.

Your DVDs will benefit, too – the Sony's upscaling is as good as anything else around. Detail and stability are never in question, picture noise is absent in all but the most taxing scenes, and the sort of solarising lesser players are prone to in bright, moving images isn't such an issue.

Sound from either source isn't perfect but, thanks to its relatively robust low end, chunkily distinct dialogue and unstressed high frequencies, it has the legs on its competitors. CD sound, as is becoming less and less surprising, is a bit of a dog's dinner – though less shrill than some rivals'.