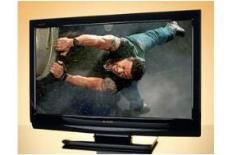 Throwing more money at a problem isn’t always the answer, but we fear this TV is a bit of a false economy

It hasn't exactly shown up in Bay City Rollers flares and a feather-cut, but there's no denying the Sharp LC-32DH510 isn't the last word in modernity.

Where specification is concerned, it looks almost out of its depth among its peers.

We've occasionally posited that the difference between a full 1920x1080 resolution and what used to be called HD-Ready is less critical with screens as small as this, but Sharp has actually tested that notion by delivering a screen with a 1366x768 resolution.

At no point have we suggested that two HDMI inputs are sufficient, but the LC-32DH510 is sporting just a pair. And while we've never said a word against the idea of Freeview HD, the Sharp intends to scrape by without it.

Fair and middling
Once set up (the Sharp's on-screen menus are basic but colourful, and the remote is a generic made more interesting by rounding the ends off it), the LC-32DH510 offers fairly agreeable TV images.

Dark tones are reasonable, colours are vibrant but not glaring and the Sharp keeps white tones clean and bright. Motion is stable enough on slow pans, but isn't above smearing the information and setting edges shimmering.

A chance to upscale DVD pictures shows the Sharp in a better light: edges calm down, detail levels improve and even motion has a degree more grip.

Good at downscaling
Working with a Blu-ray of Vicky Cristina Barcelona the Sharp is, of course, downscaling the image – and it does pretty well.

Judged against any of its closest rivals in this price point, it's slightly short of information, but on its own terms the LC-32DH510 is at its most enjoyable.

Bright and punchy colours are complemented by healthy portions of detail and, while the motion processing lacks outright authority, movement is better marshalled here than from any other source.

Sound, predictably, is as weak as a poorly kitten – but this is really the least of the Sharp's worries.

There's no shame in building a budget-conscious flatscreen, but in this case we can't help thinking the compromises are too great.