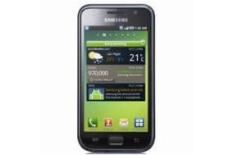 The Galaxy S has a formidable features list, especially suited to those who enjoy gathering their content from various sources, in various formats.

On the audio side, file compatibility includes the likes of AAC+, MP3, OGG, WMA, and FLACs, while it's quite happy spinning MKV, DivX, and Xvid movie files too.

And besides the 8GB and 16GB storage options, you can expand, via a Micro SD card, up to 32GB.

Not a des res, but screen is great
Some will point out that the Galaxy's 800 x 480 resolution is lower than that of the iPhone, but we'll jump to its defence.

The 4in Super AMOLED screen gives you larger real estate for your money; video content appears colourful and vibrant, while black detail and solidity are superb.

The screen also reflects less light than rival models, so you can enjoy video viewing in various lighting conditions. There is a slight coolish tint to the image and it can be just about beaten for outright sharpness, but the Galaxy S is more than capable of fighting its own corner.

Of added benefit is the fact that the phone comes supplied with in-ear headphones that don't sound especially terrible – something that can't be said for many of its rivals.

The in-ear buds sit relatively comfortable and there's an in-line mic for receiving calls (no multimedia controls, though). They kick out good bass weight and detail levels are more than acceptable for freebies.

That's not to say that swapping them for a pair of decent in-ears won't improve matters. With them in place, the Galaxy S produces a well-rounded, tonally balanced sound.

A 1GHz processor powers the Galaxy S, and the transitions between menus, apps and programmes are handled with no hesitation.

The touchscreen is responsive and not a million miles behind its closest rivals.

The arrangement of icons is very similar to the way they're viewed on an Apple device, but this isn't a bad thing, as swiping and prodding gets you to where you need to be with minimal fuss.

Content is managed through Samsung's Kies software. It's a competent piece of software; although currently it has no movie and music content for sale, it's rumoured that a new soon-to-be-released version will.

The Android marketplace is the place to shop for all your apps with more than 200,000 to choose from, including ones for Sonos and Spotify.

The Galaxy S is serious competition for the Apple iPhone. And, when you consider the fact that it's free on a contract, in many eyes this smartphone becomes the smarter option.