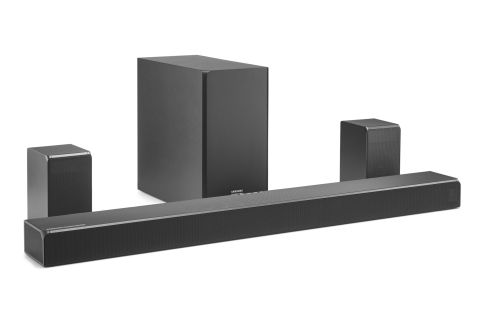 Samsung's HW-N950 is big, bold and quite beautiful, just as a Dolby Atmos soundbar should be

So far, they haven’t been particularly convincing in delivering the object-based surround sound experience. However, this Samsung HW-N950, while not perfect, stands as one of the best adverts for them yet, joining the Sony HT-ST5000 on the list of Atmos soundbars we'd recommend.

Anyone buying into Atmos does so for the promise of a surround sound with an enveloping and overhead effect. Although it is near-impossible to truly replicate the presence of ceiling speakers using only upward-firing drivers from a soundbar, hi-fi and home cinema brands are showing great determination to make this solution as close to the full Atmos experience as possible.

With its array of speakers, the Samsung HW-N950 stands a good chance of delivering on that. There are 18 speakers in total across the multi-box package, comprising a soundbar (with six drivers and three tweeters along the front, a side-firing speaker at each end, and two upfiring speakers); a wireless subwoofer (20cm bass unit); and two rear wireless modules (each with an upward-firing and front-facing speaker).

More of a system than a soundbar, it’s still less of a space commitment than a  speaker package complete with in-ceiling speakers or tacked-on, upward-firing modules. Together, they emulate 7.1.4 surround sound and can output a rather room-rumbling 512W of power.

For a multi-box system, the Samsung HW-N950 is remarkably straightforward to set-up. That’s thanks to the seamless automatic connection between the bar, subwoofer and rear modules. Power them on and everything pairs up in seconds.

Each of the four components require a plug socket, but because of the system’s largely wireless nature, the only cable you need running between your kit is the one between the bar and your Blu-ray player or TV.

The soundbar’s three HDCP 2.2-certified HDMI 2.0 sockets comprise two inputs and one output (including ARC), and an optical input provides an alternative means of connecting a digital source. There’s no 3.5mm analogue input for connecting music players or smartphones via aux, however the bar does support Bluetooth and wi-fi for music streaming from a smartphone or tablet.

At 1.2m, the length of the soundbar pretty much extends to the width of a 55in or 65in TV screen, so we’d spare a thought for your current or next AV rack’s measurements – unless, of course, you plan to mount the soundbar beneath a wall-mounted TV.

The subwoofer, meanwhile, should ideally be placed somewhere beside the bar (without blocking one of the bar’s side-firing drivers), while you’ll want the cutesy rear modules somewhere either side of your listening position, just behind your shoulder – either on stands or solid shelves.

When the kit is in place and your plug sockets are filled, take a moment to marvel at this system of stylish black metal-mesh speakers.

The Samsung’s soundfield is its stand-out sonic feature. No other soundbar has filled our AV test room quite so ably. On its own, the bar makes a big impression – its upfiring speakers do a decent job of bringing height to its delivery – while the separate speaker modules provide the subtle rear-channel effects that make soundtracks feel all the more atmospheric.

We watch the arena battle in Thor 3: Ragnarok with Dolby Atmos, and the crowd cheer really does fill every corner of the soundfield – as does the sound of the spaceship when it circles the garbage planet of Sakaar. Placed roughly 3m from one another in our set-up, the modules and bar are nicely integrated.

Aside from its impressive sonic footprint, the HW-N950 also imposes with its statement-making subwoofer. The bass is nothing short of devastating, causing our floor-planted feet to really feel the impact of Hulk’s crash landing and punches – although we find ourselves turning it down a couple of notches to a more modest level using the intuitive remote. Up too high, it can too easily bog down the rest of the presentation.

Voices are solid. In fact, everything about the Samsung’s presentation is. And even when the soundbar is pushed to its higher volume potential, it largely manages to keep a lid on hardness.

We switch to Game Of Thrones (also Dolby Atmos) and subtler effects – horse hooves and the flicker of burning wood – can be clearly heard, achieving a sense of depth and layering in the soundfield.

Once again the modules do a fine job of adding atmosphere, the chatter and hustle and bustle in the Winterfell courtyard, and the wind blowing around woods outside the wall. And the subwoofer makes no mistake of the gate’s heavy iron make-up as they’re heaved open.

But there is a slight lack of dynamic punch and crispness to the presentation, especially when compared with its rival, the Sony HT-ST5000 (£1200). This means the Samsung only receives four stars (and not five) next to its name.

A slight feeling of restraint in its midrange seems to hold the Samsung back at times. There’s a lack of outright clarity and attack to the synth-led soundtrack of Thor – a shortcoming we experience when streaming music via Bluetooth too. Impact effects are solid and bassy but not particularly hard-hitting, which is partly down to the sub’s lack of tautness. While its output is abundant, bass notes feel a bit baggier than we’d like.

Also helping to secure the Samsung’s four-star fate is the fact that it costs £300 more than the Sony – the cost of a decent 4K Blu-ray player these days.

Despite a few shortcomings, the Samsung HW-N950 proves to be one of the most effective soundbars we’ve heard in recreating an Atmos experience, throwing out an exceptionally-sized sound from its numerous speakers.

It may fall short of being the finished sonic article, but in terms of being a modern, fuss-free surround-sound solution that aptly delivers today’s cutting-edge film formats, the Samsung is a fine effort.