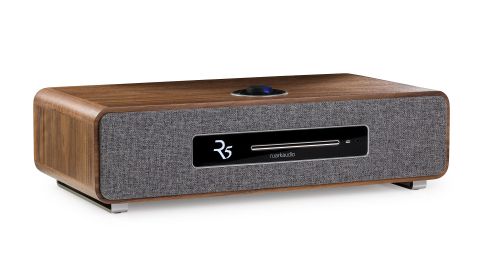 As more and more products adopt the term, ‘system’ now has many different meanings in the hi-fi world. Some systems comprise several wireless speakers in a multi-room capacity, while others are one- or two-box, just-add-speaker affairs whose features stop at source and amplification.

Others come closer to the definition of a system as ‘a set of things working together’, offering everything from source to amplification to speakers. And the Ruark R5 is one of these.

The R5 is one of the most well featured all-in-one desktop systems around. It offers network streaming, a CD player, DAB+ and FM radio, aptX HD Bluetooth and connections to hook up other sources such as a turntable and TV – with amplification and stereo speakers also built in. It combines new platforms with more traditional ones to create a single-box solution covering all music playback preferences.

While Ruark has stuck to its traditional radio roots, it has also furnished its recent systems with Spotify Connect, Bluetooth, DLNA streaming, multi-room functionality, CD players and physical connections. But the R5 is the most fully featured Ruark product yet, adding built-in access to other popular music services, such as Amazon Music, Deezer and Tidal. If you’re a subscriber to one or more of those services, simply sign in on the dedicated Ruark LINK app and you’re away.

The app isn’t just the gateway to accessing streaming services and any NAS drives connected to your network, it’s also where you can pair the R5 with up to six members of Ruark’s family of internet-connected speakers, including the R2 Mk3, MRx and R7 Mk3, in a multi-room capacity.

As we power up the Ruark R5, the app detects the system seamlessly, however, it tends to lose connection from time to time. It’s especially frustrating, given that the remote and on-unit controls aren’t as satisfactory due to the reliance on using the R5’s small OLED screen. While adequate for displaying volume and some playback info, the matchbox-sized display only reveals truncated song, album or playlist details on two lines, prioritising a big and bold clock instead.

The app isn’t necessary when you're not scrolling NAS drives or music service catalogues, though. The supplied RotoDial – a disc-shaped remote that mirrors the smaller version on top of the unit – is ideal for performing basic functions. There are buttons for skipping tracks, switching sources and accessing menus and presets, all set around a central volume dial. It’s small enough to fit in the palm of your hand and big enough not to lose down the side of the sofa.

Weighing 9.5kg, the R5 looks and feels premium, but that’s hardly a surprise considering it’s not too dissimilar to the company’s R7 radiogram, which we said was “impeccably constructed, elegantly designed and smoothly finished”. Ruark has hardly put a foot wrong when it comes to aesthetic design. There are two finish options for that curvaceous cabinet - a ‘rich walnut’ wood or light grey lacquer.

While the Ruark is a source in its own right through its CD player and built-in access to streaming and radio, other sources, such as a turntable, USB hard-drive or TV, can be connected thanks to the phono input, USB, and optical and line inputs.

Line outputs offer an option to use the R5 strictly as a source, as well as provide a secure way to connect Ruark systems together, while an ethernet socket enables a more stable alternative to a wi-fi connection. If you use headphones, there’s a 3.5mm output on the front. The only thing missing is Apple AirPlay.

Inside the chassis, Ruark has chosen Class A/B amplifiers (over the Class D type often used in such products) to feed two front-facing 75mm full-range drivers and a down-firing 12.5cm long throw subwoofer.

We stream Nick Cave’s Bright Horses from Tidal and Ruark’s familiar warm and clear tonal balance reveals itself. The stirring piano ballad is suitably deep, with Cave’s narrational vocal complete with richness and depth. The warmth of the track’s production plays into the Ruark’s hands, and it sounds utterly gorgeous. You shouldn’t expect oodles of bass depth from the Ruark, whose biggest strength is a lush and coherent midrange, but what you get is tight and snappy.

The stark openness of the R5 belies its physical proportions, affording the track’s choral accompaniment the impact intended. In terms of size and scale, you could be fooled into thinking this is the performance of a much bigger speaker. That soundstage is well organised, too, the Ruark slotting natural space between it, the strings and Cave’s vocal, and there’s plenty of detail here too.

The R5 has few direct rivals, but compared to the class-leading Naim Mu-so Qb 2nd Generation, it’s a little off the benchmark for insight. The Naim reveals more texture around violins, and the piano playing is furnished with extra layers of harmonics.

Play something a little more rhythmically demanding, such as Radiohead’s Paranoid Android, and the Naim possesses greater rhythmic conviction and a tighter grasp of timing in general. The Ruark goes with the flow of the opener’s layered instrumentation, but the interplay between it all is more interesting through the Naim. However, the Mu-so Qb lacks the Ruark’s DAB radio and CD playing capability.

Those looking to get regular use out of their CD collection will be pleased to know the Ruark’s CD experience is good; enjoyably crisp and clear to listen to, and quiet and smooth in its loading process. Radio stations are quick to load, whether they’re DAB+ or internet, and again benefit from the Ruark’s impressive clarity.

If your priority is simply streaming, there are solutions out there, such as the Naim, that deliver more sound for your spend than the Ruark – and that stands in the way of Ruark getting a five-star review. But if you’re drawn to the Ruark’s all-encompassing feature set, which includes a CD player and FM/DAB+ radio as well as networked and physical connectivity, you won’t be disappointed with the R5.

A price just shy of four figures isn’t an inconsiderable amount to splash on a desktop system, but the Ruark, almost uniquely, plays nearly everything and sounds good doing it.