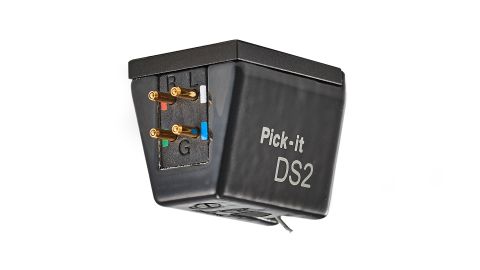 Pro-Ject's Pick-it DS2 is a superb performer with a musical and cohesive sound. It’s easy to fit too.

Pro-Ject has been a dominant force in the record player market for decades, and over that time it has usually partnered with Ortofon cartridges to complete the package. So, the arrival of its own brand cartridges comes as less of a surprise and more a case of wondering what took the company so long.

The DS2 moving coil cartridge is still built by Ortofon – and is loosely based on its Quintet series – but it is notably different in that it's been specified and voiced by Pro-Ject.

The most obvious difference is the body. Rather than the ABS/aluminium housing of the Quintet, the DS2’s housing is made of polyamide (a synthetic polymer) and shaped by laser. The idea is to create a low resonance base for the internal coil/magnet assembly to work from, so helping performance.

A threaded metal top plate is bonded to the top of this body. It has three raised sections to provide a stable interface between the headshell and the cartridge. The DS2’s stylus tip is nude elliptical, which is about par for the course at this level.

This Pro-Ject is an easy cartridge to fit, thanks to its squared body shape, which makes alignment a breeze – that threaded top plate helps too. It’s not unusually heavy at 9g either, and so should work with most tonearms without issue.

The recommended tracking weight is 2.2g and though we play around within the suggested range of between 2.0 and 2.5g, we end up settling on that value. It gives the best balance between liveliness and tracking stability.

The Pick-it DS2 has an output voltage of 0.5mV, which is on the healthy side for a moving coil. It means that there won’t be an issue with gain from any decent MC phono stage. While budget offerings, such as Musical Fidelity’s LX2-XPS (£199), will work, you’ll need to spend more on the likes of Rega’s Aria (£839) or Musical Fidelity’s MX-VYNL (£699) to really hear the cartridge’s true capability.

We mount the Pro-Ject on our reference Technics SL-1000R turntable and connect it into Cyrus’s Phono Signature/PSX-R2 phono stage. The rest of the system is our trusty Gamut D3i/D200i amplifier and ATC’s SCM50 speakers. This set-up is far more ambitious than the kind of system the Pro-Ject is likely to end up in, but it does show just how talented the cartridge is.

We give the DS2 a few days of use to settle down before we start to audition seriously. We start by setting the Cyrus phono stage to the recommend loading of 20 ohms, but find that the more typical 100 ohms works better. In our set-up at least, this gives the sound a little more sparkle and agility.

Having recently reviewed the Ortofon Quintet Blue (£349) – the step-up model in that range – we find the contrast with the closely related DS2 interesting. The cheaper Ortofon is a superb performer, sounding balanced and nuanced where as the Pro-Ject doesn’t sound as subtle to us. That’s not to damn the Pick-it DS2 though, as it’s also a more robust and dynamically expressive performer.

We feed it Four Tet’s There Is Love In You and the Pro-Ject feels right at home. It’s a punchy and dynamic cartridge, making the Ortofon sound a little reserved in comparison.

We love the way it renders bass with such gusto while still having enough in the way of agility and precision to please. The DS2 is good rhythmically too, making sense of the album’s complex production and tracking the album’s varying sense of momentum well.

It has a composed presentation, one that manages to resolve a good level of detail and organise all that information into a cohesive and musical whole. This is something that comes to the fore when we listen to Orff’s Carmina Burana, where the Pro-Ject’s composure under pressure truly impresses, as does the way it handles the music’s vivid dynamic swings.

Tonally, it doesn’t sound wholly neutral, being a little fuller and richer than ideal, but the balance chosen does tend to put the highlight on the music being played rather than encouraging outright analysis. It’s a skilfully judged balance that works well across a wide range of music.

This Pro-Ject is a stable tracker and once properly adjusted isn’t easily unsettled, even when given a demanding recording to play. It images precisely too, though the soundstage itself isn’t the most expansive around.

We’re not sure that matters so much when a cartridge is as entertaining and well balanced as this. If you’re looking to upgrade to a moving coil at this level, the Pick-it DS2 should be high on your shortlist. It’s a truly capable and musical performer for the money.