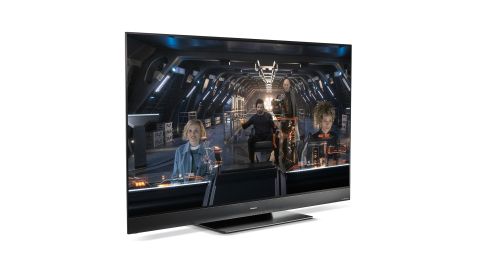 An excellent picture with excellent sound; this is still the TV by which all others can be measured

Good quality TV sound has been a problem ever since we switched CRTs for flatscreens. There just isn’t the space for a decent-sized set of speakers on those wafer-thin panels, so most manufacturers settle for perching a small set of drivers around the back, a long way from the ideal.

The Panasonic TX-65GZ2000B is part of a recent breed of high-end TVs to combat this problem by incorporating a soundbar into the design – one fitted with a set of full range, Technics-tuned drivers pointed right at the viewer. But it goes even further than that, by adding two further speakers to the rear of the set that fire upwards in order to create a more convincing Dolby Atmos effect.

A set like this doesn’t come cheap, of course, so we’re expecting even more from this than just impressive audio. We’ve already tested this flagship OLED in the smaller, 55in panel size and, though pricey, we concluded that it was a stunning TV. We’re hoping this 65in Panasonic TV will match that.

The Panasonic TX-65GZ2000B is not an aesthetic tour de force, but then it doesn’t really need to be. Most of the time, all you’ll ever see is the front face, which is nearly all picture. It’s virtually edge-to-edge glass with a thin black border of around 3mm on the top and the two sides. The bottom 6cm of the facade is taken up by the soundbar speaker grill, which leads neatly into the squared-off black metal plinth on which the TV stands.

The other option is to wall mount the GZ2000. Unfortunately, it will sit around 7cm proud (plus the profile of your mount) because, while the panel itself is only about 6mm thick, there’s a fairly deep enclosure on the rear for the upward-firing Dolby Atmos speakers that are central to the design.

The inputs are located on one side and include four HDMIs and three USBs, one of which can be used to connect an HDD for recording programming. There’s also an optical output and a connection for wired headphones and a subwoofer. The Bluetooth offering is also worth a mention as the TV can work as both a transmitter and a receiver. You can connect wireless headphones or turn that soundbar into a speaker for streams from your smartphone or tablet.

We reach for the quality, brushed metal remote with its handy shortcuts to most menus and features, and switch on the set to find Panasonic’s familiar my Home Screen 4.0 operating system. It’s not the most exciting user-interface out there and there are gaps in its app selection but it’s easy enough for anyone to use and every option and setting comes with a little on-screen explainer of exactly what it’s for.

Freeview Play is on board and neatly encompasses all of the UK's live TV and catch-up apps, and most of the other major streaming services are also here, including Netflix, Amazon Prime Video and YouTube. On the music front, though, we’d like to have seen Spotify and Tidal availability - the built-in Deezer app won't be of much appeal to many UK users.

A big TV deserves a big film, so we place Christopher Nolan’s screen-filling Dunkirk into our 4K Blu-ray player and sit back to witness the great wide sweeps of the French coastline.

There’s clear definition to the bright, low lying clouds as the three Spitfires break formation to take out the circling German bombers. It’s a kind of uniformly monochrome shot that could easily come out flat on a lower level TV, but this flagship shades the image well enough to provide a realistic sense of depth.

Compared to the incredibly sharp Philips 65OLED984, it’s a slightly soft render. The Philips offers more in absolute crispness, but the Panasonic’s presentation of the 4K resolution is still pleasing. The picture is clear and controlled and we can almost feel the fine spray of sea water each time a bomb narrowly misses its target.

There’s a lovely rich texture to everything on show. The military uniforms feel genuinely vintage. The hessian-like private’s outfits are coarse and brown, and the sheepskin collars of the pilots’ jackets obviously thick and soft. We spend much of the film marvelling at the amount of labour that must have gone into the war effort to stitch all of the clothes and equipment.

The picture is just as strong in the dark areas too. Blacks are characteristically deep, but we can still pick out the fibres and folds of the dark, dense wool of the navy officers’ overcoats despite the heavy grade to the film that might otherwise crush these kinds of details.

Dunkirk is not a film blessed with vivid hues, but the colours are handled exceptionally well. From the gold trim of the officers’ hats to the beautifully bright painted hulls of the flotilla of civilian rescue ships, each tone is produced naturally, but with enough punch to pop against the otherwise drab and overcast setting of the military retreat.

One of the big positives of this TV is that it gives close to its best picture quality right out of the box. We prefer the Normal preset, but for a brighter picture, Dynamic is also worth trying, although the colour settings take a little adjusting.

A light touch of motion processing is enough to give a good compromise between judder and too much of a processed look. It ably handles the fast movement of the stalled Spitfire rushing past the pastel beach huts and Victorian guesthouses below. The level of flicker that remains is consistent and not off-putting in this poignant and picturesque moment.

We decide to shake things up with a visit to modern-day Japan with Logan in The Wolverine in Full HD. This is where the Panasonic’s lesser drive for super-etched detail works in its favour. There’s no noise to the image where other sets might try to over-sharpen.

The HCX Pro engine at the core of this TV does a superb job of upscaling and creating just enough detail without over-cooking the processing. If you want to create harder, more defined sharpness, it’s perfectly possible with the resolution enhancement settings. Any noise that does creep in can be comfortably neutralised with the noise reduction filter.

What’s more impressive is how well this TV maintains its colour production at lower resolutions – Panasonic’s collaboration with Hollywood colour grader Stefan Sonnenfeld seems to have paid off. Everything from the neon of the modern Tokyo buildings to the red-tinged wood varnish of Yashida-san’s traditional minka lodgings comes off brilliantly.

We switch to daytime TV to test whether this OLED’s SD production is acceptable. There is an expected drop in resolution on the big screen, but the colours don’t let us down. There’s nothing about the faces or clothes of Phil and Holly and their guests on This Morning that’s incorrect or unnatural. There’s some blurring with every movement but this SD picture is better than most.

Inside that built-in soundbar are three forward-firing, Technics-tuned, 20W drivers facing the listening position and powered by 20W of amplification. On the rear, there are two upwards-firing Atmos speakers driven by a further 40W. We put Mad Max: Fury Road into our player and find ourselves greeted with an excellent soundstage.

Adding the extra dimension to the audio gives more than just a sense of height. Atmos can allow a system to better map effects into a soundfield and the one created by this Panasonic is broader and deeper than most.

The opening shot of the film is a real treat. The whispering voices from Max’s self-torment all seem to come from distinct places within our viewing room – all at varying distances between the viewer and the screen. Equally, there are some superbly placed effects as the dune buggies and bikes zoom past the camera in pursuit of our hero.

The Panasonic’s excellent dynamic ability extends to more than just whizzy noises, though. There’s a proper sense of hush when required – as Immortan Joe looks for his missing brides, when Max bursts out of the tunnels onto the cliffs, chased by a pack of War Boys.

The sense of space it offers is just as impressive and distinct, but it could be better. Compared to a dedicated soundbar, the sound is still quite small in scale. There’s not really enough space for drivers that could create a convincing sense of weight.

The Panasonic’s processor performs a few tricks to help out with the lower notes. There’s a decent depth to Max’s voiceover for example, but the big hits aren’t quite there. A good stand-alone soundbar would offer a better sense of clarity to conversations, but considering it’s from a TV, it’s a strong effort.

It’s another full set of stars for Panasonic’s flagship OLED. Whether in 55in or now 65in, you’ll be delighted by your purchase of the GZ2000B. It’s not quite the clean sweep as it was with the smaller version, though.

There are other TVs that can pull-off one or two audio-visual tricks that this TV cannot. There are those with sharper pictures, those with a more complete smart platform and those with better built-in soundbars, but this top-end OLED is easy to use and both consistently and effortlessly excellent, no matter what kind of content you throw at it. Yes, it’s pricey but it’s also very, very good indeed.