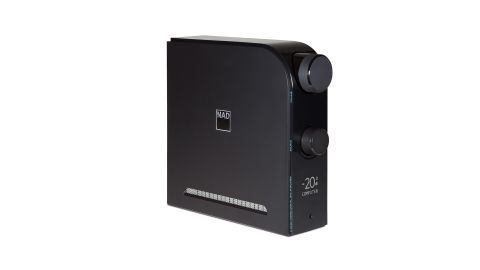 Bags of features and an enjoyable, easy listen, we just wish it delivered a little more enthusiasm

Should the NAD D 3045 ever have doubts about its parentage, it won’t need to book a DNA test, nor put in an appearance on The Jeremy Kyle Show. One glance at the near-identical features should be sufficient proof that it is indeed related to the company’s line of D-series hybrid digital amplifiers.

But that can be a dangerous game for the consumer. A similar aesthetic does not necessarily denote comparable sonic performance, and spending an extra couple hundred quid for more power or connections - as is the case with the D 3045 here - doesn’t necessarily mean there won’t be a compromise elsewhere. The idiom about books and covers most certainly applies to hi-fi too.

But despite it scoring marginally lower than the D 3020 V2 we tested earlier this year, the D 3045 is another fine amp, retaining much of the former’s charm while doubling up on power (2 x 60W) and presenting a generally more premium package.

There are obvious aesthetic differences between the NAD D 3045 and its stable mate – it’s bigger, for a start, and features an extra dial for source selection above a small screen rather than a line of LEDs to show you what it’s connected to.

Generally it’s the same book-like chassis with curved top edge that can be laid either horizontally or stand up vertically. While it’s a neat design, it is certainly possible to buy classier amps for the money.

Alongside two optical and a coaxial digital input that make use of the D 3045’s hi-res DAC, NAD has included an asynchronous USB in. This is for attaching a computer that uses the amp’s precision clock, instead of the computer’s, to reduce jitter and optimise USB for audio playback. There are also analogue inputs for those who want them.

Around the rear, you’ll also find the phono input for use with the D 3045’s moving magnet phono stage, so you can connect a turntable, an HDMI input and option for adding a subwoofer to your basic stereo set-up.

Bluetooth aptX is also built in, which allows for 24-bit hi-res wireless sharing, and it’s two-way, meaning you can send the signal to your wireless headphones and listen to the D 3045 as a personal music system.

It’s the kind of feature list that helped win our affections for the D 3020 V2 – thankfully, much of the smallest D-series amp’s sonic character remains as well.

It’s a smooth balance, with plenty of detail across the frequency range. Given the arsenal of connections, wired and wireless, that the D 3045 possesses, it would be unfair to compare it directly with a more traditional full-size analogue amplifier at this price, but there is no feeling of insight being lacking, or balance being skewed in favour of any area.

The most obvious difference between this and the D 3020 V2, though, is the gain in power. It is undoubtedly a meatier presentation, adding weight and solidity without compromising on detail or NAD’s generally smart timing. If you found its smaller family member a little lightweight, the D 3045 presents a fine and sensibly judged alternative in that regard.

In fact, the only reason the D 3045 drops a star is due to its more staid sense of dynamics. It doesn’t have the same enthusiasm for our music as the other amp in this line. It isn’t entirely averse to changing dynamics, but it lacks the punch and expression we enjoyed from the D 3020 V2.

That added power gives NAD the opportunity to really put us on the ropes, but the D 3045 is coy to land that knockout blow. The midrange in particular feels a little withdrawn, but it’s a malady that affects the whole frequency range. It’s frustrating because we know what this kind of amplifier is capable of – and more to the point, what another version of this amp is capable of.

That isn’t a stick with which we’d beat the D 3045, though. It remains a relatively enjoyable listen, with no offensive sonic traits, but we want more. We want to be treated to the kind of party we previously had with its sibling.

If you liked the D 3020 V2 but require a little extra power – and you’re happy making a little compromise in terms of enthusiasm – then the D 3045 is a fine alternative. Just don’t expect everything to be the same based on its looks.