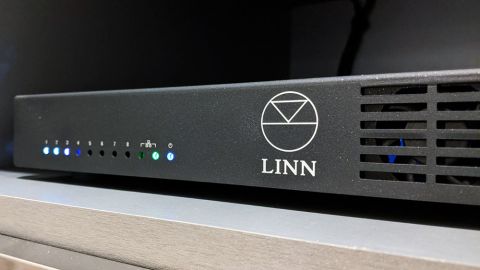 The Linn Kustom DSM means Linn’s analogue to digital transformation is now complete. That may sound like something proclaimed by a mad professor in a sci-fi movie, followed by a textbook evil laugh, but it represents a notable milestone for the Glaswegian hi-fi brand.

Linn first entered the custom installation market in 1994 with the Knekt, followed by the Sekrit DSM in 2009, but it’s only now with the recent introduction of the Kustom DSM, that its multi-room offering works primarily in the digital domain.

The Kustom DSM is an unamplified, multi-zone, network music player that packages Linn’s celebrated DSM streaming platform into a flexible solution. It is designed to stream networked music (up to 24-bit/192kHz), music services, such as Tidal and Qobuz, and any physically connected source to any other zone within Linn’s streaming network around a home.

The brand’s first one-box multi-room player works with Linn’s own app, which has been improved, but is also compatible with third-party Crestron and Control 4 programs, so it can be controlled as part of a wider connected smart home system.

There are two specifications to choose from: the 2 stream/4 zone design can send two audio streams to a maximum of four different zones (£2825), while the 4 stream/8 zone model sends four audio streams to up to eight zones (£5650) – Linn's most competitive price-per-zone yet. Naturally, adding more boxes can cater for more zones – eight, 12, 16, 20 or 24.

Connected sources can be anything from a turntable or CD player to a TV or Blu-ray player, with HDMI ARC, optical, coaxial and analogue RCA inputs available to each stream. Each zone has a pair of RCA outputs for connection to downstream components.

In the impressive showhome within Linn’s factory (see it for yourself via this new 3D virtual tour), the company demonstrated the Kustom DSM’s versatility in a Linn set-up including Klimax 350 floorstanders straddling a TV in the lounge, a pair of Series 5 speakers with a Selekt DSM system in the dining room, Majik standmounts and network player in a bedroom, in-ceiling speakers in the kitchen and bathroom, and a stereo pair of Series 3 wireless speakers in an office space. Yes, we wish too...

Control is simple – selecting grouped zones requires toggling switches on the app, for example. Linn’s Songcast technology, which checks the time alignment of products once every 5 milliseconds, ensures timeliness when all are played together.

It proved an impressive demonstration of Linn's offering, both in terms of versatility and performance – although such a set-up will be pie in the sky for many, naturally.

As with many custom install products, the Kustom DSM is designed to be heard but not seen. There’s no 100-LED volume dial that features on the recent Selekt DSM hi-fi streaming system, for instance.

The speckled black-finished chassis is designed to be rack-mountable – fitting into a standard-width (48cm) rack – although there are optional rubber feet.

The array of LEDs on the front panel indicates the zones in use, as well as zone groupings, through colour coding. Naturally, a streamer doesn’t need the same level of heat management as something with amplification built-in, but to ensure efficiency and a long lifespan, the streaming cores on the circuit board are placed on thermal pads that dissipate heat and there is also a small, low-noise fan inside.

In fact, with 3300 components, the circuit board inside the Kustom DSM is the most complex Linn has ever produced. It has been achieved in part thanks to the company’s recent factory investment in circuit board Surface Mount Technology.

As with every product Linn produces, every unit comes with a five-year warranty and is signed by the person who hand-built it.

Now that Linn’s return to the custom installation market with the Kustom DSM has, in its words, 'completed its offering', the brand has launched the Linn Whole Home proposition to illustrate how the Linn product portfolio works together for both customers and installers.

Linn wants to help potential buyers envisage a Linn set-up in their home, as well as those selling and installing them, by launching new marketing assets (such as the 3D virtual tour) and CEDIA-approved training courses.

The brand is aiming to crack the custom market, as it has done with high-end hi-fi, and is hoping the Kustom DSM will appeal to Linn loyals and first-timers alike.