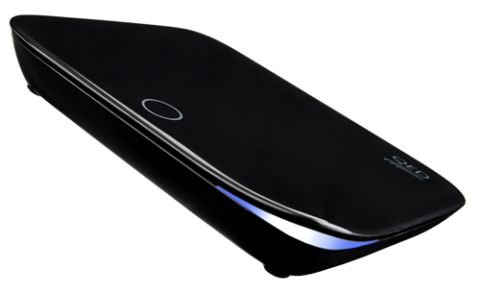 Compared with other Bluetooth DACs on the market, the uPlay Plus boasts relatively big dimensions.

Consequently it’ll take a bit more effort to conceal among your kit than the diminutive Arcam miniBlink or Crystal Acoustics BluDAC.

The raised lip on the right-hand side of the DAC glows blue or red depending on its status.

You need to press and hold the touch-sensitive button on top of the DAC to trigger the pairing process. The LED flashes red and blue until you’ve got a solid connection.

Once you’re streaming to the uPlay Plus, you can either go out through the dedicated analogue outputs and into an amp, or out of the optical digital socket and a completely separate DAC.

You’ll need to have the relevant cables on standby though – you don’t get any included in the box.

The first thing you notice about QED’s sound is the striking balance. Play Haim’s Running If You Call My Name and the female vocals sit quite deep in the soundstage.

They’re so recessed that highs and lows take greater prominence and, as a result, overpower what’s happening with voices.

You experience a similar imbalance with Tom Odell’s Can’t Pretend. His piano playing, vocal and the accompanying drums don’t knit together as convincingly as they do when heard through the top DACs, such as the Arcam miniBlink, available for this money.

The music sounds unbalanced and off-kilter. And even with a decent level of detail to fall back on, there’s a lack of solidity and conviction in the sound.

Other DACs, such as the Crystal Acoustics BluDAC, sound clearer and much more articulate and it’s almost half the price.

The uPlay Plus just doesn’t do enough to argue its case.