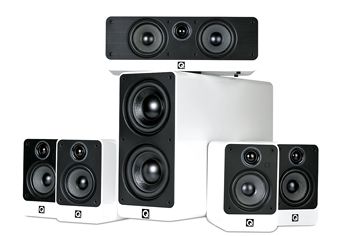 Best traditional package up to £700, Awards 2014. This Award winner is a must-hear for anyone who wants an attractive and affordable 5.1 system that also works well with stereo and multichannel music

In only a few years Q Acoustics has become a serious force when it comes to – for the most part, affordable – speakers. So whether it takes stereo or home cinema form, a new range is a big deal.

This is our first look at the company’s new 2000i 5.1 system. It replaces last year’s Award-winner, so naturally we have high hopes…

The system comprises two pairs of 2010i speakers, a 2000Ci centre channel and the 2070Si subwoofer. There’s a £50 price hike – but upgrades to justify the difference.

You’ll have to look closely to spot the upgrades, but they’re not to be down-played.

Worthwhile design tweaks
Like the 2020i speakers, the 2010is have a new tweeter (including a new decoupling ring), a different material for the mid/bass driver and a revised crossover. The front baffle has had subtle tweaks, too.

All the speakers here – with the exception of the subwoofer – can be wall-mounted, too, with Q Acoustics’ new ‘tilt and turn’ bracket aiming to make it nice and simple.

But impressively, it’s in the sonic department that the biggest leaps have been made. We simply don’t expect the scale that this system can deliver for this sort of money.

The satellites are cohesive and exciting, dynamic and detailed, while the sub digs deep but stays in control. Music is similarly confident, the front pair of speakers proving capable of rhythm and good timing, while basslines are controlled but powerful. Vocals are clear.

Has the best got better? Simply put, yes.