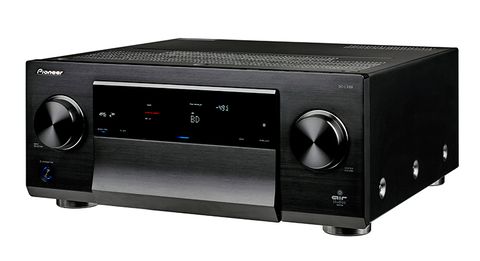 You won’t fail to be entertained by the SC-LX89’s energy and muscle. It’s just a tad short of the delicacy needed to be an all-rounder

Lean muscle was one of the many fortes of the Pioneer SC-LX89’s predecessor – the SC-LX88 earned a five-star review back in December 2014, blowing away its competition at the time. A year on, and the theme remains; its nine Class D power amplifiers are capable of a total of 850W multi-channel simultaneous drive.

As with its nearest ancestor, the SC-LX89 is Dolby Atmos-enabled, equipped with HDMI for 4K and boasts the AIR Studios stamp of approval. You’ll notice little has changed in terms of aesthetic or setup either.

Inputs for Atmos speakers still aren’t clearly labelled and require a little experimentation, and you’ll need an external power amplifier for surround back speakers if you want 7.2.4, but otherwise, getting this amp off the ground – taking advantage of MCACC Pro or fine tuning yourself – couldn’t be simpler.

Playing the Blu-ray of Edge Of Tomorrow, we are hit with full force by the SC-LX89’s heft. It’s like a kick in the teeth, only more desirable. As planes and aliens explode, the power and detail is seriously impressive.

It has a great sense of organisation, without which these apocalyptic war scenes would be largely incoherent. Here, however, crashing aircraft are separated from artillery fire, and that again from hollering voices.

Impressive, too, is how, no matter how busy the scene becomes, the sound doesn’t harden up or become bright. That may have been a concern with earlier Pioneer amplifiers, but they appear to have taken due care here; you get unwavering attack without it becoming difficult to endure.

That might is also reflected through Atmos. The difficulty is in finding an amp that is not only capable of offering Atmos, but integrating it properly. In that respect, the SC-LX89 excels; there is nothing detached or flimsy here, you are able just to accept the sound without being forced to notice it.

What we would like is greater subtlety, through the midrange especially. Naturally, the lack of dynamic sensitivity is most evident in the voices; it isn’t devoid of intonation and expression entirely, but there is a sense of everything being shouted.

That trade-off with power is well worth it for films such as Edge Of Tomorrow, which thrives on the SC-LX89’s effortless force and organisation, but will lose out somewhat with more nuanced pictures.

Testing it in stereo with the Blu-ray of Stevie Wonder: Live At Last that lack of expression is similarly noticeable. What you do have, added to the organisation, is a decently rhythmic amplifier.

Though perhaps lacking a little of the music’s groove, the band is incredibly tight and the instruments interplay nicely to give some of that musicality back.

We find the same spinning CDs or playing an iPod through the USB port. The iControlAV5 app, which effectively turns your phone or tablet into a wireless remote, is particularly useful for music playback.

If you want extra oomph from your action blockbusters and an immersive Atmos experience, you can’t fail to be impressed by the SC-LX89’s muscle and composure.

We’d like a bit more dynamic subtlety to make this a one-size-fits-all amplifier. Still, for a little over two grand, Pioneer are going to leave you mightily entertained. For that it deserves a healthy dollop of praise.

See all our Pioneer news and reviews