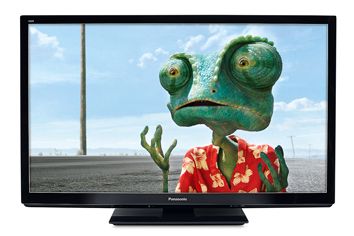 Best 46-47in TV, Awards 2011.This versatile 46in plasma is our favourite TV at this screen size - a worthy Award winner

We think by now it’s safe to say that Panasonic is on a roll with its 2011 TVs. After a couple of years in the ‘good-but-not-great’ department, the company has delivered a raft of thoroughly competitive screens – the TX-P46GT30 is the latest.

Unsurprisingly, this plasma has a lot in common with the TX-P42GT30 we tested (and enjoyed to the tune of five stars and a Group Test win) in our June 2011 issue.

Like its little brother, it has Freeview HD and Freesat TV tuners, it’ll record to a USB drive, and it has Skype video calling (among a raft of features) on the much improved Viera Connect on-line portal. But, annoyingly, it isn’t supplied with any 3D glasses.

HD broadcasts a pleasure to watch
The remote is essentially the same logical handset Panasonic has been using for years, and in conjunction with decent menus it makes the TX-P46GT30 easy to get the best from. And its best is thoroughly impressive.

The HD tuners are as efficient as any rival – rich and detailed, with lustrous blacks and a martial control of motion, they make even the most testing broadcasts (such as Wimbledon) a pleasure to watch. Skin-tones, especially, are a match for the best.

Blu-ray (both 2D and 3D) continues the theme. Strong contrasts, assured motion, deep, detailed blacks and natural textures and skin-tones make for an absorbing watch – and, provided you’ve ponied up for the glasses, 3D images are stable, solid and all but devoid of crosstalk.

The Panasonic is an assured upscaler of DVD content too, and manages to make the best of the sometimes-marginal quality available on YouTube and the like.

It even sounds passably full-bodied and distinct, even if there’s a definite ‘closed-in’ quality to its audio reproduction.

Panasonic is right in the zone at the moment and the TX-P46GT30 is superbly watchable proof.