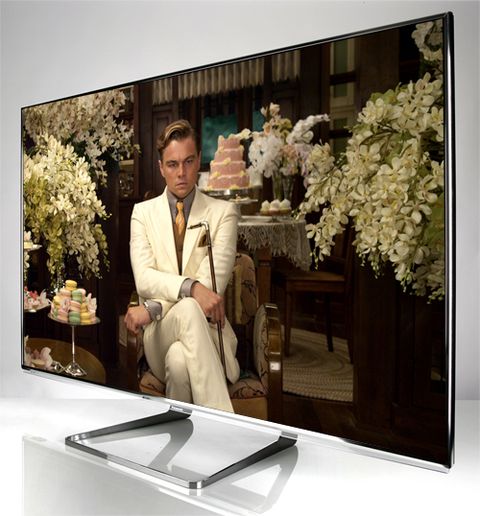 The Panasonic TX-L65WT600 4K TV is arguably in the strongest position of all its Ultra HD rivals.

For starters, it’s the only set that currently meets the HDMI 2.0 standard out of the box, which means it’s also primed for 4K content at 50/60fps –vital if you’re going to be able to watch UHD broadcasts in the future.

The company provided a media server with some 4K content at 60fps (frames per second), and we are thoroughly impressed by what we see.

Part of the footage is a classic American car driving through a desert setting. The depth, the attention to detail and the general clarity are all superb – motion is dealt with confidently and the lines of the car’s bodywork and interior are sharply drawn.

There’s a real sheen to the paintwork, with the sun reflecting off it vividly. And the sand of the surroundings almost reveals itself grain by grain.

This Panasonic WT600 is no slouch with non-4K content either. There are decent Freesat and Freeview HD tuners on board, with Freesat just inching ahead in quality.

The TV’s a strong performer and even standard-def channels upscaled to its massive 3840 x 2160-pixel resolution are watchable.

Of course the switch from standard Channel 4 to HD brings benefits in terms of clarity and depth, although some rivals have slightly more punch.

DVDs don’t bring the best out of this Panasonic 4K TV, but it’s good to know the TV’s internal scaler is up to the job.

The DVD of Iron Man 3 gives the set ample opportunity to make a mess of Tony Stark’s metal suit, but the TV proves resolute, rendering those sharp lines as crisply as possible.

The Blu-ray version gives the WT600 a helping hand and allows you to enjoy a picture with a cleaner finish and greater realism.

The picture has a great cinematic, rounded quality. Some go darker and blacker, but the balance of dark and light is neatly judged here, as is the TV’s handling of colours.

The gold parts of the Iron Man suit don’t look too blingy, while the red appears solid but not searing.

Some rivals do better with motion; the Panasonic isn’t quite as confident as the Sony KD-65X9005A or the Samsung UE65F9000 when faced with tricky pans or rapid movement.

You can try and counter this with picture processing, but this sacrifices realism and can introduce picture artefacts. The Philips 65PFL9708 extracts more detail from darker scenes, too. The Panasonic WT600 can do deep blacks, but the detail isn’t quite there.

The perfectly adequate active 3D picture has a sprinkling of extra detail compared with passive rivals, but we found it wasn’t quite as easy-going on the eyes, nor was the image quite as immersive as on other 4K Ultra HD TVs we've seen.

Panasonic revamped its smart offering for 2013 and it’s much to the user’s benefit. The TX-L65WT600 has the same My Home Screen set-up that you’ll find on the vast majority of its latest sets.

This makes for a slick, intuitive and very accessible system despite not having the gloss of, say, Samsung’s Smart Hub.

The fact that the Panasonic TX-L65WT600 already has the required HDMI 2.0 hardware for 4K gives it the jump on rival screens.

Add to the equation the solid picture performance and you’ve one of the pace-setters on the 4K TV market.