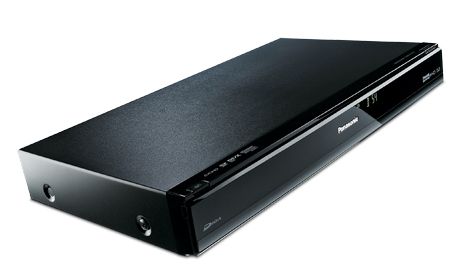 A capable machine, but it struggles to match the best for all-round ability

Panasonic has good form with recording devices. Be it VHS, DVD or Blu-ray, the company has engineered some impressive products.

It has also equipped its TVs with some of the best Freeview HD tuners we’ve seen, so whipping up a decent Freeview HD PVR should be a formality, one would think…

Well, yes and no. In many ways, this machine does its best not to stand out from the crowd. The HW100 looks unassuming – not too dissimilar to one of Panasonic’s Blu-ray players.

Behind a drop-down panel, there’s a USB socket, SD memory card slot and a couple of buttons for changing channel.

The hard drive is a modest 320GB, but that’s enough for 79 hours of high-definition recording or 154 hours of standard.

Twin Freeview HD tuners
There are two tuners, and you can record from both, while watching a recording at the same time. It will even convert 2D content into 3D, if you so desire.

The Panasonic box offers some smart functionality through Viera Connect, such as YouTube, and the ability to make Skype calls.

The on-screen menus tarnish things a little. They look dated compared with the slicker menus offered by rivals. The EPG is a congested, too, with not much space for programme titles to breathe.

Recordings are faithful
Thankfully, picture quality is up to scratch. The standard-definition broadcast of Countdown doesn’t disappoint though it’s a tiny bit hazier when compared to its HD equivalent, but there’s not a huge amount in it.

High-def brings added stability and precision to the edges of objects and also helps to clear up any traces of on-screen noise. Recordings are faithful to the originals, while the box produces an open, crisp sound.

For the money, the Panasonic is a solid enough machine, but the best user experience can be found elsewhere.

See all our set-top box reviews