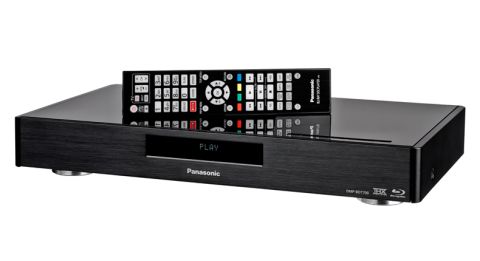 Why pay £500 for a Blu-ray player when you can pick up a decent one for less than £100? As this flagship Panasonic DMP-BDT700 shows, it’s all about performance.

The Panasonic has 4K Ultra HD upscaling alongside its 3D Blu-ray qualities, smart features and extensive file compatibility inside its sleek casing – but its picture quality is what justifies that premium price.

Its biggest rival is Marantz’s UD7007, which has dominated this category for the past few years. Is the BDT700 up to the task of dethroning this long-standing favourite?

The picture looks fantastic. Play the Pacific Rim Blu-ray and we’re immediately captivated by the rich, punchy hues, the intense black levels, the bright whites and incredible level of detail.

The DMP-BDT700 is a confident player, juggling high contrast scenes and skin tones easily. Colours are beautifully balanced and the DMP-BDT700’s excellent contrast makes for a bold and riveting picture.

Stream the Sin City 2: A Dame To Kill For trailer on YouTube and the inky blacks, stark whites and crisply drawn lines of the highly stylised film are faithfully portrayed. Streaming quality is stable and clean, too.

Switch to test favourite The Adventures of Tintin and the Panasonic shows off its smooth handling of motion. It doesn’t put a foot out of place during that exhilarating chase through the streets of Baghar.

We know it’s an animated film, but the texture of jumpers, metal pipes, Snowy’s fur and the sea are tangible – the subtlety the Panasonic describes is astounding.

Tintin is a great disc for 3D too, and the Panasonic remains dynamic and lively despite the slightly darkened scene. The sense of depth and motion is also good. It’s a crisper, smoother and cleaner picture than any budget alternatives we’ve seen.

This is most apparent with upscaled DVDs: Who Framed Roger Rabbit may be over 25 years old, but the Panasonic delivers such a noise-free picture with clean lines and bright colours that we almost forget we’re not watching it on native 1080p.

The 7.1 channel sound is clear and detailed, too. Power, scale and dynamics are all heard in Hans Zimmer’s soundtrack for Rush.

It’s perhaps not as robust as the Marantz’s sound, and could do with more solidity in the midrange, but it’s certainly precise and zippy.

In the hi-fi and AV world, physical heft often indicates quality, so we’re pleased the Panasonic has a solid build. The unit is sleek, minimal, and the brushed-aluminium finish adds class.

Touch controls for power, play, stop and eject/close are placed flush on the top, and are quick to respond. The display and loading tray are hidden underneath a magnetic flap (it closes with a pleasing snap), leaving the fascia clean and uncluttered when not in use.

The display is practical and easy to read, while the disc loading tray works smoothly. Loading times are speedy too.

Speaking of which, do you - like us - nudge the tray close instead of pressing the appropriate button? The Panasonic stubbornly doesn’t allow you to do that.

We do like the convenience of just pushing the tray in after loading a disc, but maybe the Panasonic can break the habit of a lifetime.

The remote control is nicely built, with buttons and shortcuts logically laid out. It’s backlit too, so easy to use in a dark room.

As expected, the Panasonic throws in all the smart features you’d find on a top-range TV: BBC iPlayer, Netflix and YouTube, as well as a web browser.

You can stream internet radio using Aupeo!, while social media is here in Facebook and Twitter. It even has MySpace. The player’s smart interface is one we recognise from nearly two years ago. It’s a shame that it’s not the excellent ‘My Home Screen’ found on new Panasonic TVs.

Still, the Blu-ray player’s interface and home menus are neatly laid out in large tiles and work without a hitch. File compatibility for the DMP-BDT700 is respectable: MP3, WAV, WMA, AAC, Apple Lossless, MKV, MP4, Xvid and JPEG files, including high-res FLAC files (24-bit/192kHz in stereo; 24-bit/96kHz in 5.1 channel).

Unlike rivals, such as the Marantz UD7007, the Panasonic doesn’t play older high-res formats like DVD-A and SACD.

The Panasonic is equipped with two HDMI 2.0 outputs capable of upscaling up to 4K/60p video streams. You will also find single coaxial and optical outputs on the back, while those with older amplifiers can connect using the 7.1 multi-channel audio outputs.

A pair of RCA phono outputs are also available. You can connect to your home network using either ethernet or the built-in wi-fi facility; both methods are stable when streaming content.

With DLNA compatibility on board, you can stream media stored on any laptop, smartphone, tablet or NAS device, provided they’re all plugged into the same network as the Blu-ray player.

The DMP-BDT700 also has two inputs that you won’t find on most budget players: a USB port and an SD card slot.

You’ll find them neatly hidden away under the front cover flap, and not only do they support usual media files, they’re also capable of playing any 4K JPEG photos that you’ve taken with a 4K smartphone or camera.

Is the Panasonic DMP-BDT700 a potential Award-winner? It certainly proves itself worthy, both in its class-leading technology and picture performance.

It delivers such a gorgeous picture with Blu-rays and DVDs that the Marantz UD7007 has plenty to worry about. If you’re looking for a premium Blu-ray player to match your premium home cinema system, then this classy Panasonic DMP-BDT700 fits the bill.