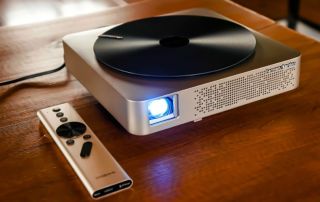 With the in-built Harman Kardon sound system removing the need for an amplifier and speakers, the Z4 Aurora projector has been designed to be an all-in-one entertainment system.

It can project a Full HD or 4K image up to 300in onto any clear surface and can support 3D movies too. It runs on the Android operating system, meaning you can install games and apps from the Play Store. The Z4 even supports Xbox One and PlayStation 4 games consoles.

The Z4 is fitted with vertical +/-30 degree and horizontal +/-30 degree automatic keystone correction to make set up as quick and easy as possible. It comes supplied with a Bluetooth remote control, but you can also control it from the unit itself via a series of gestures.