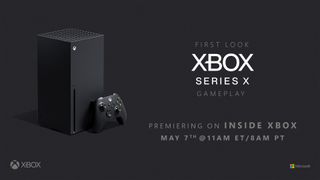 The anticipation for the new Xbox Series X is set to go up a notch on Thursday, 7th May (11AM ET, 8AM PT, 4PM BST), when we'll get our first glimpse of gameplay from the 8K games console.

The news was announced by Xbox's official Twitter account, with the event set to be part of an Inside Xbox streamed event. There's been no official word from Xbox on which games will be showcased during the stream, but it looks like third-party publishers and developers will be a key focus.

Ubisoft announced on its Twitter feed, that Assassin's Creed: Valhalla will be one of the titles you'll be able to see, while there have also been rumblings of a next-gen installment of the Forza racing series. Could we get a look at Halo Infinite Xbox Series X gameplay in glorious 8K? Fingers crossed!

Xbox has already revealed major details about its next-gen console, including its design, plus key specs and features. This gameplay reveal will be one of the final pieces of the puzzle, together with a price. Hopefully, we'll find out latter well in advance of the console going on sale 'Holiday 2020', when it will take on the Sony PS5 in a battle of the 8K consoles.