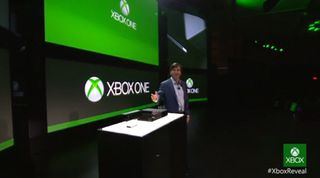 Microsoft has today revealed the new Xbox, called Xbox One. Xbox One aims to be a complete home entertainment system, using voice and gesture controls to allow you to flick between live TV, music and gaming.

Although an Xbox One price has not been confirmed, UK retailers Zavvi and ShopTo have set the pre-order price at £399.99 and claimed a November 30th release date for the new Xbox.

The "all-in-one system where it all comes together", says Microsoft, features games, movies, music and now live TV. The Xbox One has HDMI inputs and outputs, and a Blu-ray drive – five years after the failure of HD-DVD.

The Xbox One will also support 3D and 4K, confirmed by Larry Hryb, Director of Programming for Xbox Live, in a Yahoo! Chat session: "Xbox One supports both 3D and 4K".

It seems likely that this "4K support" will simply mean 4K upscaling for now, seeing as no 4K Blu-ray standard has been set for 4K games or movies.

On the subject of movies, Microsoft even got Steven Spielberg involved at the Xbox One launch, announcing plans for Spielberg to deliver a "premium TV series" based on the hugely popular Halo game, while there was news of an Xbox One tie-in with the NFL American Football league.

The Xbox One won't be compatible with Xbox 360 games, with new Xbox One games coming on Blu-ray discs. You won't need to insert the discs every time you want to play, according to Wired.

The rumour is games will be installed from the disc to the console's hard drive, allowing you to play the game without inserting the BD disc every time. We can't help thinking the Xbox One's 500GB hard disk drive would fill up pretty quick.

Microsoft calls the Xbox One, "truly intelligent TV", with the new console cleary focusing on live TV, on-demand streaming and cloud content, aiming to be much more than just a games console.

The Xbox One has an 8 core CPU, custom built by Microsoft, a D3D 11.1 graphics chip with 32MB of in-built memory. The conosle has 8GB DDR3 of RAM and 500GB of hard disk drive storage.

As well as the Blu-ray/DVD drive and HDMI input and output, there are two USB 3.0 inputs, a digital optical audio input and an Ethernet connection.

There's a new version of the Xbox Kinect sensor (with a dedicated port for the sensor as well), complete with a 1080p HD camera.

There was no mention of 3D support, perhaps no surprise, but also no mention of 4K, which we many expected the Xbox One to support.

Microsoft has been expanding its Xbox content and connectivity with the launch of Xbox Music and the Xbox Smartglass smartphone and tablet app.

Xbox Music is a streaming music service to take on the likes of Rdio and Spotify, with free and premium versions available for your Xbox.

Xbox has also revealed details of a host of new games for the Xbox One, including versions of the hugely popular FIFA, Forza and Halo franchises, while also confirming the Xbox One wouldn't be backwards compatible with Xbox 360 games.

The Xbox One will be launched "around the world, later this year". So no word on an official UK release date (or US, for that matter), or indeed confirmation from the US giant on the all important Xbox One price.

Rumours before the Xbox Reveal event suggested two price models for the next Xbox, with a standalone version for $499 and a $299 version that requires a two-year Xbox LIVE Gold commitment, at an expected price of $10 per month. We shall see.

There will be more news on the new Xbox One at the E3 gaming convention in a few weeks time.