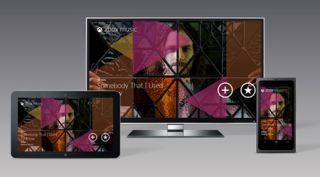 Xbox Music delivers a free streaming music service, though limited to a certain number of hours after six months, an ad-free Spotify competitor for £8.99/month and the option to buy, download and store music in the cloud.

The service will launch on Tuesday on Xbox, and then follow on other Microsoft devices such as phones and tablets, replacing Microsoft’s previous online music portal, Zune (although Zune Music will remain on Windows 7).

The Xbox Music service will also come to iOS and Android devices, though not until next year.

Xbox Music will have 30 million songs at launch and a host of functions reminiscent of streaming rivals Deezer, Rdio and Spotify, such as artist information, discographies and a radio function.

Xbox Music sound quality
A premium version is available for £8.99 a month – Xbox 360 users will have to pay that fee on top of their Xbox Live subscription to gain access – with full features and presumably the highest sound quality.

We asked Xbox UK for information on Xbox Music sound quality but were told that information wasn't available as yet.

The free ad-supported version will only be available on Windows 8 (it arrives pre-installed on the OS and is the default music player).

However, many features will only come with the premium service, such as the scan and match service similar to iTunes Match which allows you to transfer music to cloud storage and listen to their collections across a variety of Microsoft devices.

"The launch of Xbox Music is a milestone in simplifying digital music on every type of device, and on a global scale," said Don Mattrick, president of the Interactive Entertainment Business at Microsoft.

Xbox Music will be available in 22 countries from October 26th.