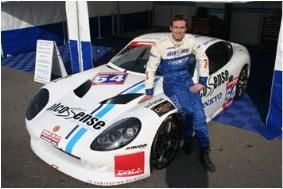 That's our logo on the bonnet of his car, just in case you hadn't spotted it. Other sponsors include Onkyo, Dali speakers, Chord Company cables and InFocus projectors.

Hunter is well known for his racing antics, and it was exactly a year ago that he survived an horrific crash at Oulton Park, as you can see on YouTube.

However, not a man to be easily daunted, Hunter was back at Oulton Park last weekend racing his £50,000 Ginetta G50. This year his car has undergone a number of modifications, including a new floor and venturi design to increase downforce.

"I was a little apprehensive, Oulton Park is one of the last 'old school' circuits, fast, with barriers close to the circuit and very little run-off," says Hunter.

"If you're going to crash anywhere, you don't want it to be here. Unfortunately last year, I did."

First a lucky escape
Luckily Hunter escaped from the flaming wreckage and was ready to face his demons at the weekend.

"My team-mate this year is Gary Simms, a young, up-and-coming driver from the junior ranks. Friday testing went well and once I was out on the circuit, the scars from last season were forgotten."

Once the racing proper began, Gary got the car into third place, then Hunter took over and was soon chasing the leader, Lawrence Tomlinson, who won the Le Mans 24 hrs race in 2006.

Luck then played its part when Lawrence was forced out of the race and Hunter cruised to victory.

Then a dose of bad luck
But the celebrations were short lived. After the race, another driver put in an official complaint about the position of the rain light on the back of Hunter's car, which was found to be 20cm out of position and therefore against regulations. Gary and Hunter were disqualified.

"We were heartbroken as the punishment didn't fit the crime, it was a minor mistake that cost us everything from that race," says Hunter. "We appealed the decision, but out appeal was rejected."

Still, the pair were determined to win the second race on Easter Monday. But again the gremlins struck with a damaged hose on the front brake caliper, which made driving the car more difficult to drive.

Stiill, our dynamic duo managed to hold on to third place, so all was not lost. Best of luck to Hunter and Gary at the next race at Spa, Belgium in three weeks time.